While Netflix launches the second part of the tv series Lupin, with Omar Sy, and Toei animation announces the new animated series of Lupin the third, the character created by Monkey Punch as an Arsène Lupin direct descendant, the gentleman thief comes to visit Il Cinema Ritrovato, too.

In the section dedicated to the Tomijiro Komiya Collection, we will be able to enjoy seven minutes of daring actions with one of the first film appearances of the gentleman cambrioleur, portraited by the Pathé star Max Linder. 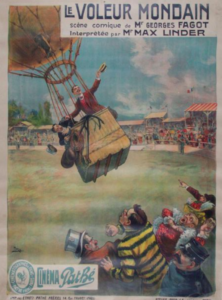 In Le vouleur mondain (France, 1909), directed by Linder himself on a screenplay by Georges Fagot, Arsène Lupin assaults the embassy of Pennsylvania to steal Lady W’s jewels and escapes the police… using a hot-air balloon!

This film is just one of the many discoveries made possible by the passion of Tomijiro Komiya. Son of a restaurant owner, a hundred years ago in Tokyo, he was collecting distribution prints of European films, maybe asking projectionists in the neighbourhood for snippets or frame cuts. Komiya was a fan of European cinema in general, but he especially loved Italian films, and his collection now is rich in unique prints of S.A. Ambrosio and Film d’Arte Italiana.

What remained of this legendary collection was donated to the National Film Center (now National Film Archive of Japan) in 1990. Ever since, precious Komiya prints have enriched Il Cinema Ritrovato’s sections on Genina, Grémillon, Capellani and Frusta. But it is high time to revisit the collection of Tomijiro Komiya as a subject in its own right. In fact, much of it has never been screened anywhere in the world.