Browsing through the variety of sections of Il Cinema Ritrovato programme, we have selected here the “The century of cinema: 1901”, especially with regards to the chapter dedicated to the arrival of the Seventh art in our town.
Please find below the introduction to “Films seen in Bologna in 1901” and a gallery of graphics and press cuttings of the time collected during the research work for this section. 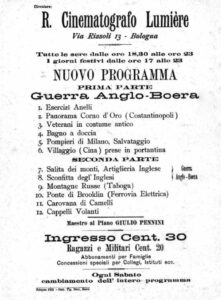 1901 is an important year for film in Bologna. In May of that year the Reale Cinematografo Lumière, the city’s first cinema, opened its doors – even though it closed them again after a few weeks. On 26 May 1901, the first news of the films screened appeared in the ‘Arte e Artisti’ section of “Gazzetta dell’Emilia”: “Cinematografo Lumière – a few evenings ago the rooms of the former pub Limentra, at 13 Via Rizzoli, started screenings of interesting motion pictures during the day from 11am to 1pm and in the evenings from 5-11pm. The pictures change often. Last night the parade of Bersaglieri Cyclists, the Khedivial entourage, an attack of the Czarina’s hussars and various others were a success.”

According to Elena Nepoti’s research, it was a travelling ex-Lumière representative, Giovanni Casamenti, who ran Reale Cinematografo Lumière; it was open for a month or a little longer and then was reopened in October of 1901 by Rosina Cappellini in Marchese with new hours (6:30-11pm, and 5-11pm on public holidays) for about two months. In addition to the news reported by the local press, three original and complete programmes have been identified, which even include the name of the pianist, Maestro Giulio Pennini. These illuminating documents inform us that for a 30-cent ticket (with a discount of 10 cents for military personnel and kids) you could see a show of 12 short Lumière films, for a total duration of ten minutes.
However, the films shown on Via Rizzoli were not Bologna’s first movie attraction in 1901. The first screening mentioned by newspapers was held at Teatro Eden Kursaal, an elegant multipurpose venue located at 69 Via dell’Indipendenza, which opened on 31 December 1898. In this case too it was a Lumière programme, shown for just three evenings (preceded by harmonica player Luigi dell’Oro), from 6-8 April. Unfortunately, no trace is left of the titles screened, as is also the case for the films shown by the families of fair workers and travelling salesmen in the city that year.
We are celebrating the films shown in Bologna 120 years ago with one of these three historical programmes – the one with the most titles that we were able to match with the original French ones and their corresponding films in the Lumière production catalogue. Of the 12 titles only two have not been identified (Salita dei monti, Artiglieria inglese and Sconfitta degli inglesi), so as a prologue to the programme we have added the three Lumière films screened in Bologna on 25 May 1901. We also substituted Manœuvres des pompiers au palais royal de Florence for Pompieri di Milano, salvataggio, which Aldo Bernardini believes could be a lost hors catalogue film shot in 1896 by cameraman Giuseppe Filippi. 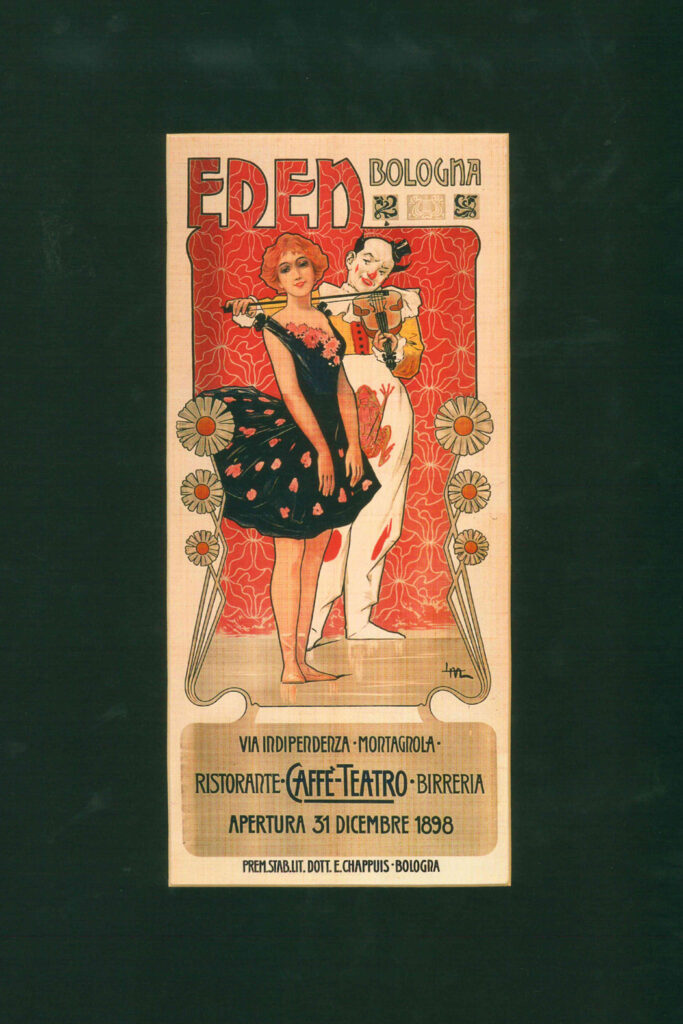 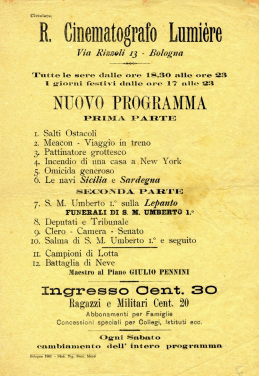 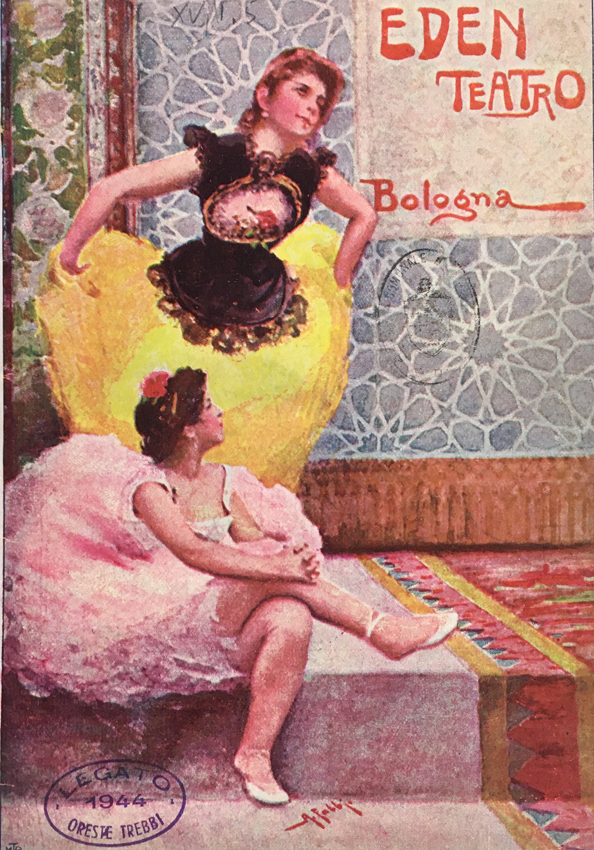 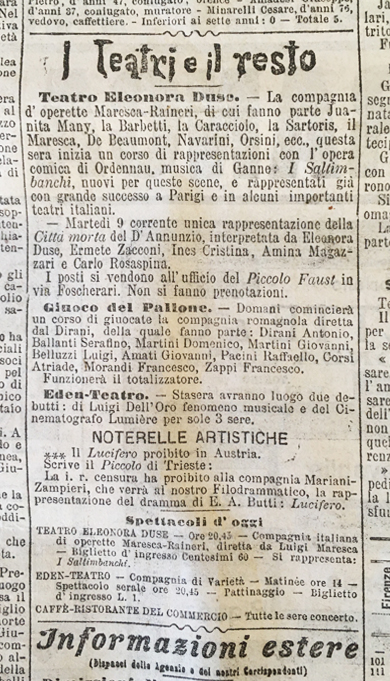 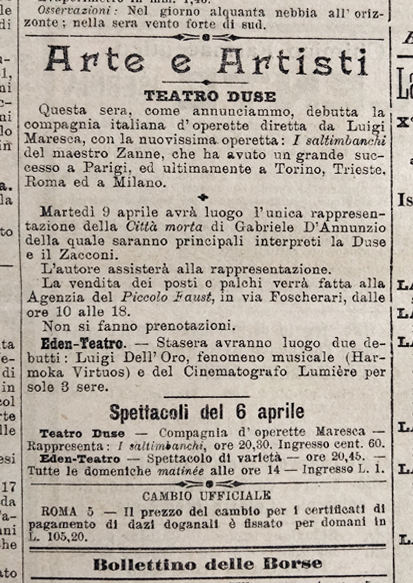 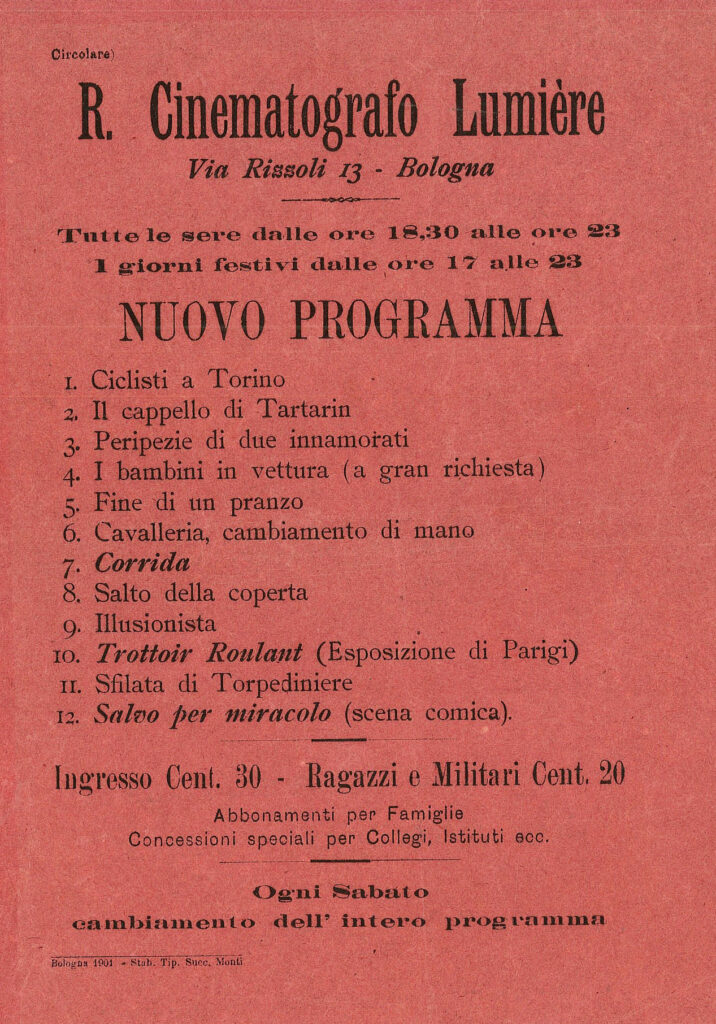