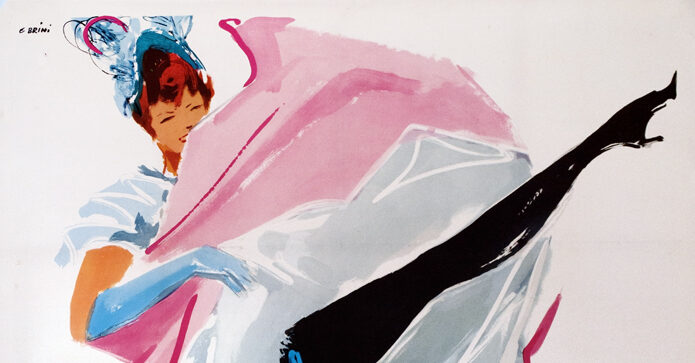 Like every year, Il Cinema Ritrovato is not only films: two different exhibition will be set up during the festival. In Biblioteca Salaborsa and at the Grand Hotel Majestic it’s already open an exhibition of some pieces from Maurizio Baroni‘s collection will be exhibited. Sustained by an inexhaustible passion, Baroni collected over 32,000 posters and lobby cards representing over 27,000 titles from 1945 on. In biblioteca Renzo Renzi from july 19th will be set up an exhibition dedicated to the costumist Gino Carlo Sensani.

Baroni, born in Castelfranco Emilia in 1951, was one of the principal collectors and scholars of Italian film posters.
He was just 9 years old when he went to see Clementine Chérie, a film with Rita Pavone, for whom he nurtured a boundless passion. He liked her so much that he couldn’t resist: on leaving the cinema he cut Pavone’s face out of the poster and took it with him. When he got home, he realised that he didn’t like it as much separated from the rest of the image, and so he went back to remove the entire poster.
Then came The Beatles’ A Hard Day’s Night. And that’s how it all began.
At the beginning his parents weren’t very pleased that he was going around tearing posters off of walls and cinema showcases. One night, after a furious row, his father ended up burning everything he had collected. From that moment on, his objective became to recover everything that had been brutally taken away from him. With time, his parents resigned themselves to this and every year, as a reward for passing the school year, his father would take him to buy posters from SAC in Bologna.
Sustained by an inexhaustible passion, Maurizio Baroni collected over 32,000 posters and lobby cards representing over 27,000 titles from 1945 on – titles which have made film history, both in Italy and abroad. He also built up a collection of film music that contains over 91,000 soundtrack extracts,
including many unreleased titles.
It’s thanks to his intuition that today we can talk about the masters of that glorious period of Italian cinema as ‘cinema painters’. His cataloguing was carried out with scientific rigour and was pioneering, as far as Italy is concerned, resulting in an unprecedented image database of film posters. We also have to thank him for his intuition and perseverance in unearthing and bringing to the light the painters who “ignited the imaginations of cinema and art lovers with their creativity”. His collection (today mostly conserved by the Fondazione Cineteca di Bologna) encompasses various genres and the work of the most important directors and bears witness to the evolution of the different styles of the great “painters of the cinema”.

On display in the basement of the Grand Hotel Majestic from the 17 June to the 5 September 2021 (Mon-Sun 11.00 – 18.00) will be the original preparatory sketches for important film posters including Arthur Penn’s The Miracle Worker (1962), Duccio Tessari’s Fornaretto di Venezia (1963) and François Truffaut’s Stolen Kisses (1968).

Working in both the theatre and the cinema, Gino Carlo Sensani defined the role of costume designer as an autonomous vocation, transforming it, including in the eyes of the public, into a position of profound expertise and cultural significance.
Born in the province of Siena in 1888, as a young man he travelled and spent time in Paris, where he dedicated his time to painting and became well known for his woodcuts. On his return to Tuscany, he spent time with the writers Aldous Huxley and DH Lawrence and intellectuals of the calibre of Marino Moretti and Aldo Palazzeschi. In 1914 he made his debut as a costume designer for the theatre and in
1932 the artistic director of Cines, Emilio Cecchi, introduced him to a career in the cinema when he entrusted him with Guido Brignone’s film Pergolesi. The cinema seems to have been the natural outlet for Sensani’s creativity and he designed the costumes for almost 90 films collaboratin with Alessandrini, Camerini, Matarazzo, Blasetti, Soldati, Lattuada, and many others. His apprentice Dario Cecchi relates
that he used to cover the card of his designs “with clean, new paper” and reused them again and again; he did so not out of frugality, rather “with extreme detachment, he would cover gouaches and watercolours that other people would undoubtedly have conserved because he was convinced that cinema was nothing but a remnant and therefore the pictorial images with which he gave visual life to
cinematic tales should also become remnants.”
The preparation that Sensani dedicated to his costume designs was original and absolutely rigorous. As a man of exceptional taste and culture, he created costumes for a character only after a detailed literary, pictorial and historical reconstruction and an analysis of the period in which the film was set and the spaces in which the characters moved. According to Sensani, the costumes should express a psychological interpretation of the character and a figurative interpretation of the atmosphere of the film. This is the specifically artistic aspect of the costume designer’s work that he understood and taught very well. In fact, from 1935 Blasetti assigned him a position teaching costume design at the Centro
Sperimentale di Cinematografia film school in Rome, where he transmitted his artistic and professional knowledge to his students with enormous generosity. With Sensani, a genuine school with a precise method took shape in Italy for the first time, to be carried forward in the future work of talents such as Maria de Matteis, Piero Gherardi, Dario Cecchi, Piero Tosi and Gabriella Pescucci.