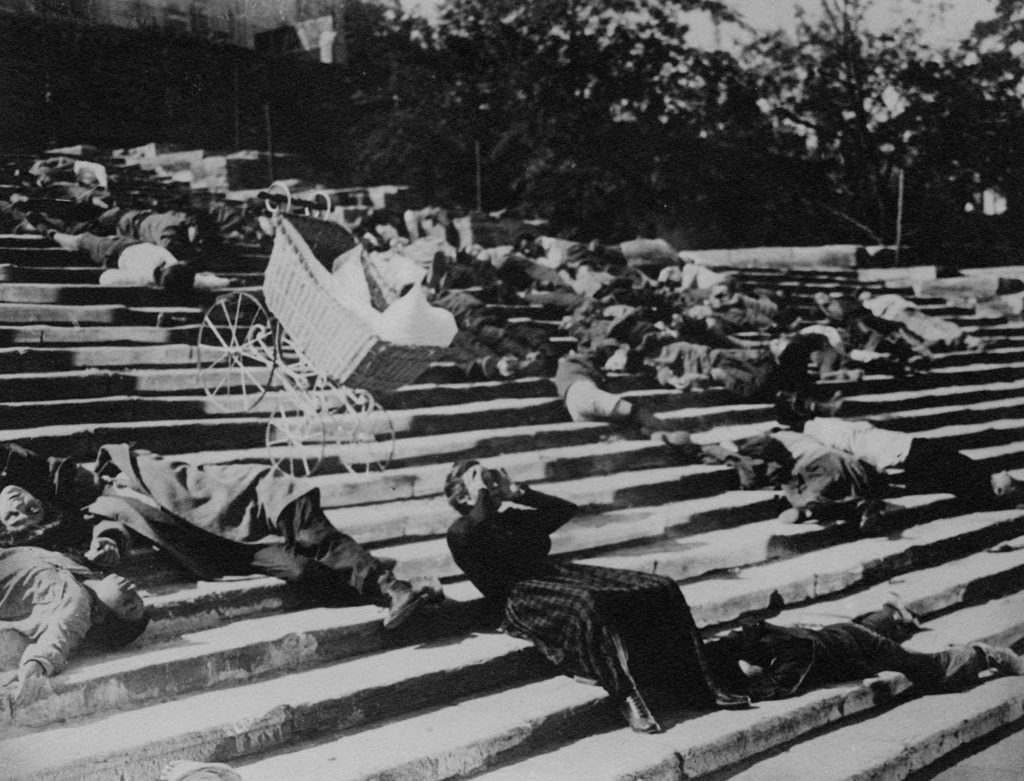 Battleship Potëmkin will face the great public of Piazza Maggiore on Monday, June 26th, at 9.45 PM, on the occasion of one of the most awaited nights of Il Cinema Ritrovato, the festival organized by the Cineteca di Bologna from June 24th to July 2nd.

A very special night during which the long-time film classic by Sergej Michajlovič Ėjzenštejn will be accompanied by the Orchestra Filarmonica del Teatro Comunale di Bologna, directed by Helmut Imig, with the original score composed by Edmund Meisel.

One more gift to the public of Il Cinema Ritrovato: opening the night, the international première of the latest restoration of the film La Roue – Prologue, the monumental film divided in a prologue and four acts directed by Abel Gance in 1923. The restoration of La Roue – Prologue is a work in progress: we will see a first sneak preview of the restored version of Gance’s masterpiece, with live music accompaniement by an orchestra directed by Timothy Brock, playing the original score from the great composer Arthur Honneger.

The Russian film historian Naum Klejman will introduce Battleship Potëmkin, who presented the film with the following words: “In the spring of 1925 the young Sergej Ėjzenštejn, who made its debut as a director with Strike!, was asked to direct a film to celebrate the 21st anniversary of the Russian revolution. The film, originally titled Bronenosec Potëmkin, was shot and edited in four months. Even though it was dedicated almost entirely to the events from 1905 – the rebellion of the crew on a battleship of the Imperial Russian Navy’s Black Sea Fleet –, the film reflected the fundamental themes of the Revolution: the cruelty of the oppressive regime and the social tension for freedom. The first screening was held on December 21st at the Bol’šoj Theatre, on the occasion of the jubilee. Despite its triumphal success, the film commission decided initially to screen Battleship Potëmkin only in workers’ circles, to conclude conferences and meetings. In fact, this kind of movie, without any romance or adventure plots, was not expected to be appreciated by the great film audience. The legend says that the poeth Vladimir Majakovskij threatened to beat whoever would keep the film away from large scale distribution. The first few days of screening in theatres showed that, in spite of expectations, this film, with no heroes and with no romance, could effectively compete with Hollywood’s major success, such as Robin Hood with Douglas Fairbanks.

In the spring of 1925, the German censorship tried to prevent Battleship Potëmkin from being released in theatres, driven by the fear that a film on 1905’s Revolution could trigger a revolutionary wage in Germany with its strong emotional impact. Reichstag’s social democratic party then won the trial against cersorship, proving that the film was not subversive. Battleship Potemkin was based on the democratic slogan “fight against despotism and social inequalities”, but also on the appeal to end violence. Despite all this, the film was censored, and in some parts of Germany the film was passed for screening but the music by Edmund Meisel was forbidden. In a large part of Europe, Asia and South America Bronenosec Potëmkin was banned. Only after World War II the film started screening again in theatres, with the original score. At the Bruxelles’ Expo in 1958 the film was among the twelve best movies of all time, and since then it has been considered a worldwide masterpiece”.

1960: the icon Brigitte Bardot is the protagonist of La vérité, a film by Henri-Georges Clouzot recently restored and screening on Monday, June 26th, at 6.15 PM at Cinema Arlecchino. The film will be presented by the director of Cannes Film Festival, Thierry Frémaux, and by the curator of the restoration Grover Crisp (Sony Columbia).

In June of 1959, Henri-Georges Clouzot wrote, for the weekly “Jours de France”, an account of the trial of Clotilde Seggiaro, a young woman accused of murder in Draguignan. When the producer Raoul Lévy suggested he direct a film which would use Brigitte Bardot differently from the commercial roles to which she was usually confined, Clouzot remembered that story, “because I was shocked, in the medical sense of the term, by the way justice is administered in criminal cases. How can one believe that it is possible to arrive at the truth? I wanted to show the constant ambiguity of the truth and that the same event can be shown from several different points of view”. Fascinated by Bardot’s charm and sensuality, Clouzot gave her the contradictions of a tragic heroine. In the midst of the Nouvelle Vague era, Clouzot never strays from a vigorous classicism. The film was a commercial triumph, perhaps also as a result of the impression created by several clamorous, newsworthy incidents (Bardot’s suicide attempt just a few weeks before the film’s release). The Italian censor insisted on about ten cuts adding up to roughly six minutes in length.

Piazza Maggiore is just the peak of the iceberg of Il Cinema Ritrovato. The festival welcomes new restored gems born from the partnership between Martin Scorsese’s Film Foundation and UNESCO, committed to the restoration of 50 films from the African cinema heritage.

Sunday, June 25th, at 10.45 AM at Cinema Lumière (Piazzetta Pasolini, 2/b), we will see Soleil Ô, a gorgeous film denouncing the racial segregation suffered from the African immigrants in France, realized in 1967 by the franco-mauritanian director Med Hondo. Hondo was a central figure of African cinema and theatre in France, and he is known for being the french dubber of Eddie Murphy, Sidney Poitier, Morgan Freeman.

Med Hondo will introduce his film, and on Monday, June 26th, at 3 PM in Sala Auditorium he will hold a Film lecture.

Refined filmlovers prefer fragments. Incompleteness frees a film from narrative chains, while enhancing its qualities with a Distencing effect. And colours take on a mysterious life of their own, even more so when projected by the light of a carbon-arc lamp projector and by projectionist Stefano Bognar. This unique experience will take place in Piazzetta Pasolini, on Sunday night (June 25th): a carbon lamp projector will bring us back to the origins of cinema. Goodbye Youth, realized in 1918 by Augusto Genina, will be accompanied live by Daniele Furlati (piano), Frank Bockius (drum) e Filippo Orefice (saxophone).

“In order to work on the music of Augusto Genina’s Goodbye Youth, I retrieved the piano score for the three act operetta of the same name by Giuseppe Pietri, which has a libretto by Sandro Camasio

and Nino Oxilia and was published by Casa Musicale Sonzogno. I did not follow the music of the operetta chronologically, but rather selected several themes which I adapted for the film. The extracts borrowed from Pietri all come from the first act of the operetta: for the beginning of the film, over the opening credits, I elaborated the Solemn March which concludes the first act; while for the ending with the Dorina and Mario’s moving embrace, I found that the choral theme at the end of the Introduction to be a very suitable nostalgic piece. I associated two very different but beautiful waltzes by Pietri with the characters of Dorina and Elena, as I felt they were in perfect harmony with the psychological characteristics of the two female antagonists. For this festival the accompaniment will be performed by a trio: Filippo Orefice on the tenor sax, clarinet and flute; Frank Bockius on percussion; and me on the piano.”