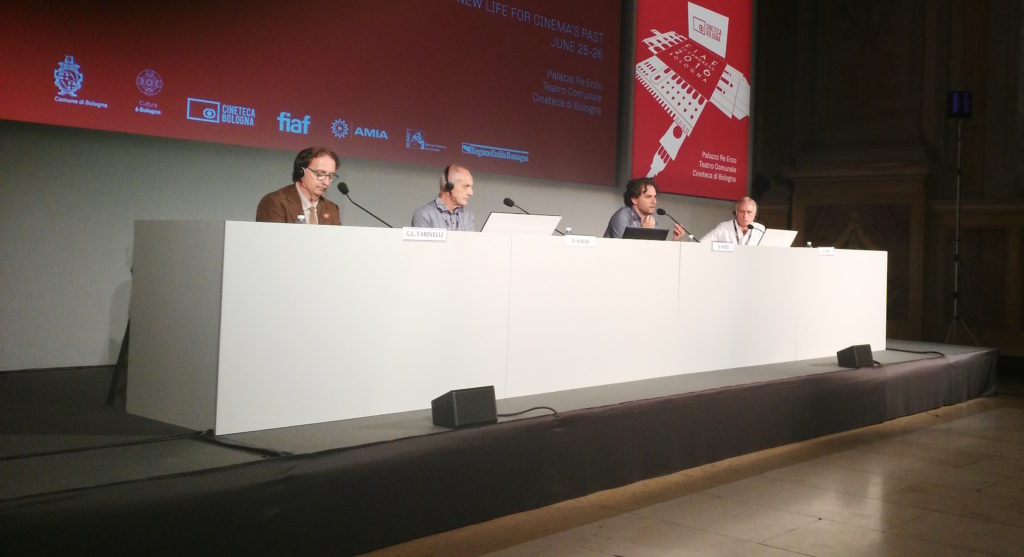 This year during the festival Il Cinema Ritrovato another great event is taking place in Bologna: the 72nd FIAF Congress (22-28 June 2016), hosted by the Cineteca di Bologna. After more than twenty years, the International Federation of Film Archives, dedicated to the preservation of the world’s film heritage since 1938, comes back to Bologna with a unique Symposium program (25-26 June) focusing on one main topic: a new life for cinema’s past. A theme that also runs through the entire festival and that has been leading, over the past few years, Cineteca di Bologna activities and projects in collaboration with the laboratory L’Immagine Ritrovata.

The first day of Symposium Congress was an incredible source of inspiration. As stated in the opening lines of the congress’ guide, “film archives have been restoring films for eighty years. A new sensitivity evolved over the course of the twentieth century, and over the past ten years the digital shake-up has changed how film restoration is viewed.” The first session was opened by Gian Luca Farinelli (Cineteca di Bologna), together with Nicola Mazzanti (Cinématèque Royale de Belgique) and Thierry Frémaux (Cannes Classics/Institut Lumière), who lead us on a journey through the history of film restoration, from the very beginning up until nowadays, with special attention to restoration practices in the digital era.

The conversation continued with Kevin Brownlow (Photoplay Productions) and Josh Siegel (MoMA) discussing film preservation as something connected not only to a cultural phenomenon rescuing film heritage from being forgotten, but also to personal experiences of cinema. As Kevin Brownlow pointed out, there was a time when an entire generation was able to discover films on a range of formats from 9.5 mm (also known as Pathé Baby film) to nitrate. And this was also part of the cinephile experience. What Film Archives are doing is bringing it back to the great public. How do they do it? Alexander Horwath (Austrian Filmmuseum) and Martin Koerber (Deutsche Kinematek) tried to answer this question among others. As Martin Koerber said, “we should explore technology. You can’t understand the content without understanding the system.” Technology plays a big role in reframing film restoration, breathing new life into cinema and making it more visible at a higher quality. Despite the new splendor given to old movies, quoting Guy Edmonds’ FoFa Case Studies 2012-2015 (2016), “little attention has been given to restoring the experience of cinema in its technological dimension.” Technology is indeed very important in film restoration. However restoration is not only a technological matter, but also an historical one. This is what Esteve Riambau (Filmoteca de Catalunya) discussed in its presentation, asking a key question: “is it necessary to rewrite the history of cinema?”

Concluding this first session, a round table run by Gian Luca Farinelli, with Grover Crisp (Sony Columbia), Davide Pozzi (L’Immagine Ritrovata) and David Walsh (FIAF Technical Commission), debated the future of film restoration. The future of restoration should always take into account cinema’s past. To Grover Crisp, this means trying not to denaturate the original intent of the filmmaker. To David Walsh, the future of restoration is to recreate a perfect simulation of what was originally shown while converting it into a new technology. If the authentic experience is projecting the film itself, how do we impose elements of authenticity in restored versions? Film experts are needed to work with cinematheques and film archives, not only for commercial purposes, which of course do exist, but more importantly for cultural reasons. Furthermore, Davide Pozzi suggests that the future of film restoration lies in being able to approach classics with a renewed spirit, facing new challenges, but always scientifically, following a “chemin de traduction” (Nicola Mazzanti) as objective as possible. After all, restoration is an open process.