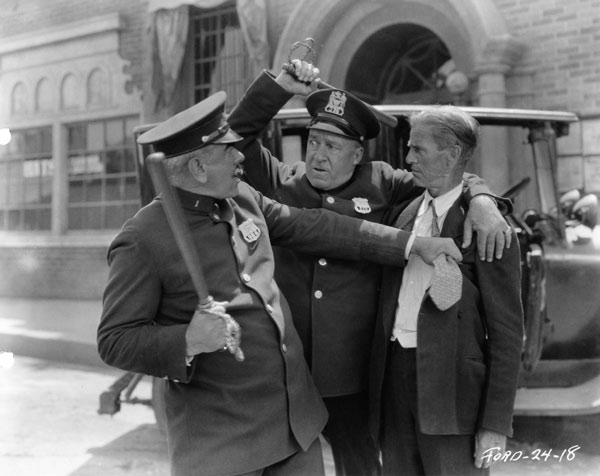 Our cause is noble. Isn’t it time to eliminate once and for all the deep suspicion that Ford’s silent output was mainly an undifferentiated preparation for his real achievement that came later? Opinions differ about that, but I remember, shuddering, my own earliest, innocent and ignorant definition according to which Steamboat Round the Bend (1935, a full 18 years after the first film Ford directed) marked the end of “John Ford before John Ford”. Which it might well be, if you leave out most dimensions of Ford’s work and see him only as a bucolic poet.

Ford’s early work carries a strong emotion through an individual – Harry Carey’s deep, melancholy eyes, a man at one with the landscape (Straight Shooting, 1917). Or the eccentric, strange images, well before the famous influence of Murnau, in Hell Bent (1918), a film that opens with a painting – is that a first? Even if most of the 25 films Ford made with Carey are beyond human reach today, those we can see elevate Carey to the heights of Fonda or Wayne as the definitive Ford hero. And we can find other strong tendencies – the loving Americana of Just Pals (starring Buck Jones, 1920); the birth of a nation story that is The Iron Horse (1924), with its deep undertones of history and its dark mystical forces in the midst of the search for light; the tragicomedy and deeper ironies of 3 Bad Men (1926), combining the sublime and the everyday in a way that matches almost any of Ford’s later films.

This silent West is thus not only a prolegomenon to Ford’s own great Westerns to come. His all-around, all-genre work is hardly irrelevant either, ranging from impressionist touches and tonalities of irresistible comedy (Riley the Cop, 1928) to his “Murnau films”, which reach a remarkable depth of tragic alienation in Hangman’s House (1928), burdened with carrying the sins of the past, and the heightened stylization of Four Sons (1928), a high point of melodrama or an excess in style, according to one’s tastes.

The rarely seen – and equally fascinating – early sound period lets us glimpse how different a career Ford could have developed, if Stagecoach had not defined his destiny at the end of the 1930s. At the beginning, Salute (1929), Ford’s first West Point film, reveals his wisdom about yet another field of life, sports. Submarine Patrol and Airmail (1932), seeming to be about war and “adventure”, have shattering moments about loneliness, men searching for who they really are in the presence of death. The concluding masterpiece of this period, Pilgrimage (1933), reminds us that Ford made not only Irish-Welsh films but, like Frank Borzage during the same years, conceived a strange group of films that are not so much his “German films” as they are films that take place in Germany: Pilgrimage, Riley the Cop, Four Sons.

As we focus on this less well-known part of John Ford’s life work, we might remember that the same situation also holds true for Bergman and Kurosawa, to take two examples: their early careers are seldom discussed, but include films that perhaps didn’t lead anywhere in an obvious way, but nonetheless show highly personal and original initiatives. This applies to all Ford’s existing films (or the existing fragments) from this period – there are 23 silents – each has its own identity and is no less memorable than the later ones that may seem more “perfect” or are more widely seen.