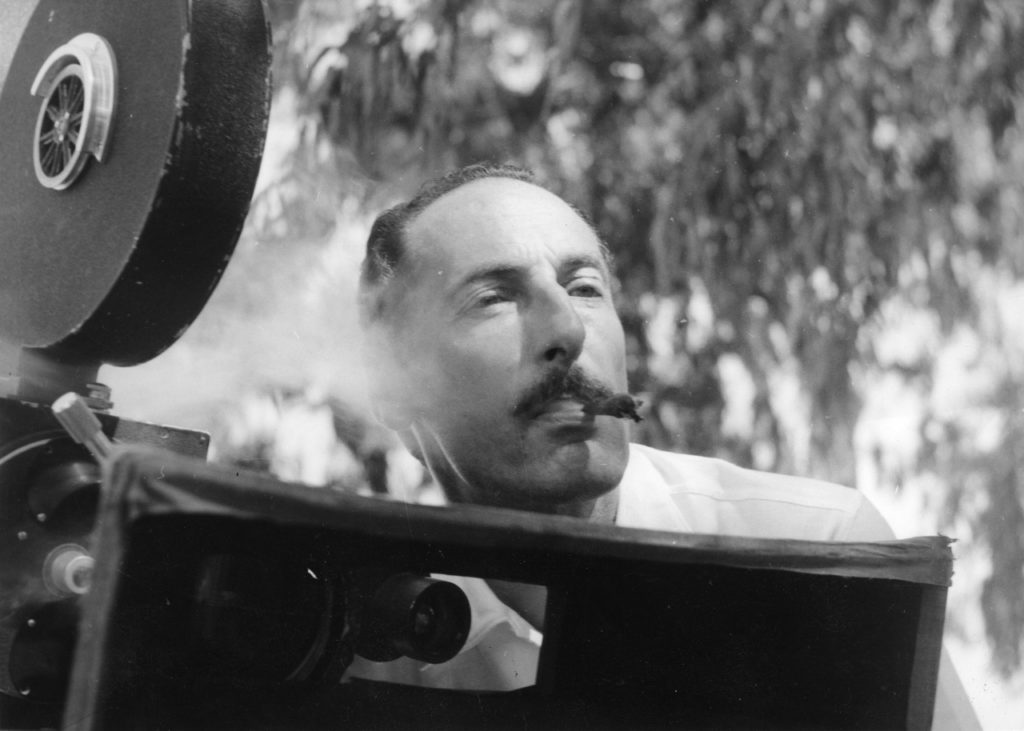 Cinema’s destination, obtained in rare instances by the great of the great: Losey, Lang, Preminger and Cottafavi, consists in freeing the viewer from any conscious distance and sending him into a state of hypnosis with the spell of gestures, looks, small facial and body movements, vocal intonations, within a universe of sparkling, damag- ing or propitious objects in which the viewer gets lost and then finds himself more mature, with a clear mind and at peace. […] Only Losey, Preminger, Cottafavi, Don Weis, Lang, Walsh, Fuller, Ludwig and Mizoguchi knew, to different extents, the secret of the grip of the actor and the décor, which Murnau and Griffith were unable to take to the extreme and that Hawks, Hitchcock, Renoir and Rossellini glimpsed at but never controlled.

Michel Mourlet’s words have an unsettling effect with their tragic, absolute and visionary precision. Fifty years later they maintain the subversive power of a perspective that has been called “mystic”. Like all the “great of the great”, Vittorio Cottafavi would never have expected so many compliments (Truffaut, Moullet), nor outrage (Mourlet, Adge), not even becoming a political “case” (his Fiamma che non si spegne was publicly branded a defense of fascism at Venice in 1949). “Sustenance” was the word Cottafavi used to describe some of his most elegant, touching and modern films, concealing behind his mild pride for his work (which he had fought for and seemed he should lose with every film), his full awareness of being in a successful phase (the sword and sandal films), in 1959, of an unlucky film career; in fact, in 1957 Cottafavi had started working for RAI in a phase of dwindling passion. He ended his relationship with the big screen in 1964 (with the Brecht like 100 Horsemen, which he proudly defended); his films lived an almost secret life for decades and were seen only by those who were able to understand them at the time, becoming one of the most sensational cases in the history of “popular” film of a direc- tor who was able to create an intense, deep, almost morbid relationship with his viewers: for an entire generation of cinephiles declaring love or hatred for his films was like a litmus test of an exclusive sensibility.

While selecting films, our intention was to choose Cottafavi’s lesser known works, like his debut film Our Dreams or Lo sconosciuto di San Marino (where he works side by side with Michal Waszinsky, a Polish Jew who escaped to Italy), or “damned” films, like Fiamma che non si spegne, or the splendid swashbuckler Milady and the Musketeers, ending with Maria Zef, a project of his youth that he made for television at the end of his career. That said, it is not difficult to see that there is a theme that weaves its way through this retrospective: the great female characters that Cottafavi gave us, whether in melodramas, like the “classics” Una donna ha ucciso, Traviata ’53 and A Free Woman, or in pepla like The Legions of the Nile (we find just as many and just as important characters in his work for television). We love Cottafavi’s women because they are not heroines, nor are they victims of gender related mechanisms or the cruelty of men. As Pavese would say, they go beyond pain and death, they are the acts they perform.

We would like to consider this important tribute of Il Cinema Ritrovato as part of an itinerary that will continue with a second year of re-discovering Cottafavi. The first year included Rai3-Fuori Orario’s presentation of some of Cottafavi’s television productions, a special issue of «Bianco e Nero» dedicated to him and edited by us, and the retrospectives “I 1000 occhi” and “Atlantide Cinema”, and the second year will culmi- nate with a book to be published in 2010, with the collaboration of the Cineteca di Bologna. Eleven years after his death, sixty years after the tragic release Fiamma che non si spegne, we are now cognizant of the uniqueness of the journey that we are striving to preserve, together with friends and accomplices, and for Cottafavi. We dedi- cate this retrospective to all of them.