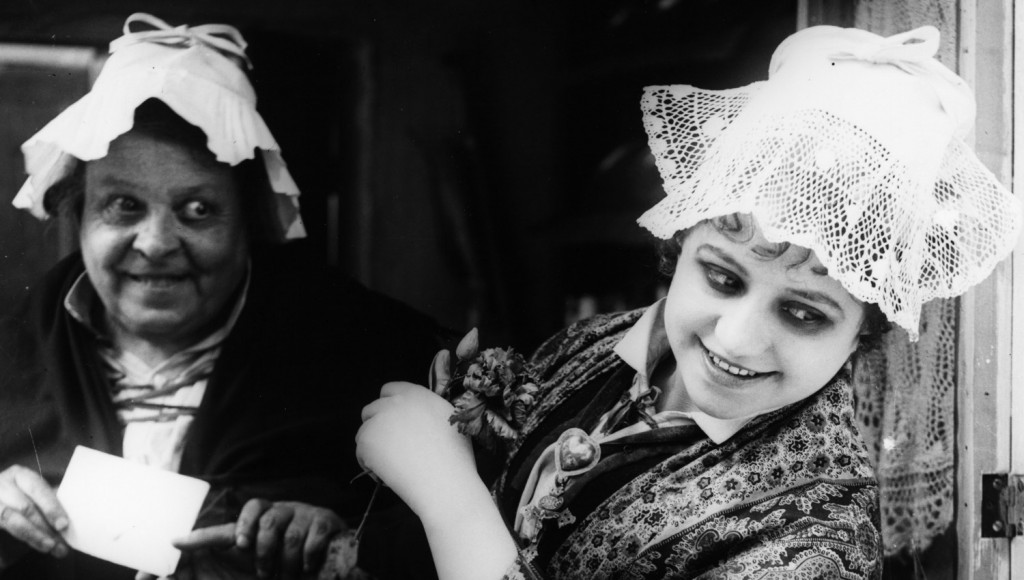 Strangely, the four great comic actors of Italian silent film (though not a single Italian among them) shared a close physical resemblance, and even an expert might confuse Henri Chapais, a.k.a. André Deed (stage names: Cretinetti, Boireau or Gribouille) with Ferdinand Guillaume (Tontolini, and later Polidor), Raymond Frau (Krikri, later Dandy) or Marcel Perez (Robinet).
It is unthinkable, on the other hand, and impossible, to confuse the three Italian actresses who played their regular partners. Nilde Baracchi, Lea Giunchi and Valentina Frascaroli are as different from one another as a tulip, carnation and lily of the valley: Baracchi, a dark-haired domina with the physique of a fearless peasant-woman; the blonde Lea, a tomboy ready to smash anything in her path; and Valentina, the ever-endearing, ever-lovely Valentina, a source of joy for anyone who sees her.
Valentina Frascaroli (1890-1955) was signed up by Itala in 1909 and subsequently appears in numerous comic scenes by Cretinetti. If he is a ‘maschera’, a character type, she is too: an effervescent, affable Columbine of the cinema, cunning and catty, wise, clever and coquettish. But she was better than him, and more versatile, and she had a dual career, not only as comic actress alongside Deed, and alone in the Gribouillette series produced by Pathé, but also as a jeune ingénue in dramatic titles such Sacrificata! (1910), a very early and remarkable film which has miraculously survived.
Leafing through period publications we can gather that Frascaroli was a much-loved and appreciated actress. Little remains of her filmography (over 100 titles) but the meagre residue is noteworthy: a fragment of L’emigrante (Febo Mari, 1915), an incomplete copy of an Italian Jane Eyre, Le memorie di una istitutrice (1917), and above all Il delitto della piccina, a political film of 1920, given the thumbs down by the censors, probably never distributed and maybe for that reason rediscovered in its entirety in a period nitrate copy.
Single cut-out frames allow us to fill in the lost Italian conclusion of Tigre reale (1916), in which Frascaroli plays an important role, whereas this is almost invisible in the version (made for export) we have of this diva film. Sadly the same is true of the dark science-fiction mini-series Mado, conceived and shot by André Deed: a lost opening, a third section that was never shot, and a fragment of the central part with only occasional moments showing Valentina in the role of the evil Countess Mado. I would so love to rediscover Il documento umano (1920), the first episode of the trilogy, and the missing parts from the second, L’uomo meccanico (1921), a nightmare engendered by the first mechanical war.
Heartfelt thanks to Marco Grifo (member of the Brigate Irma Vep) for his help in establishing the filmography of Valentina Frascaroli.