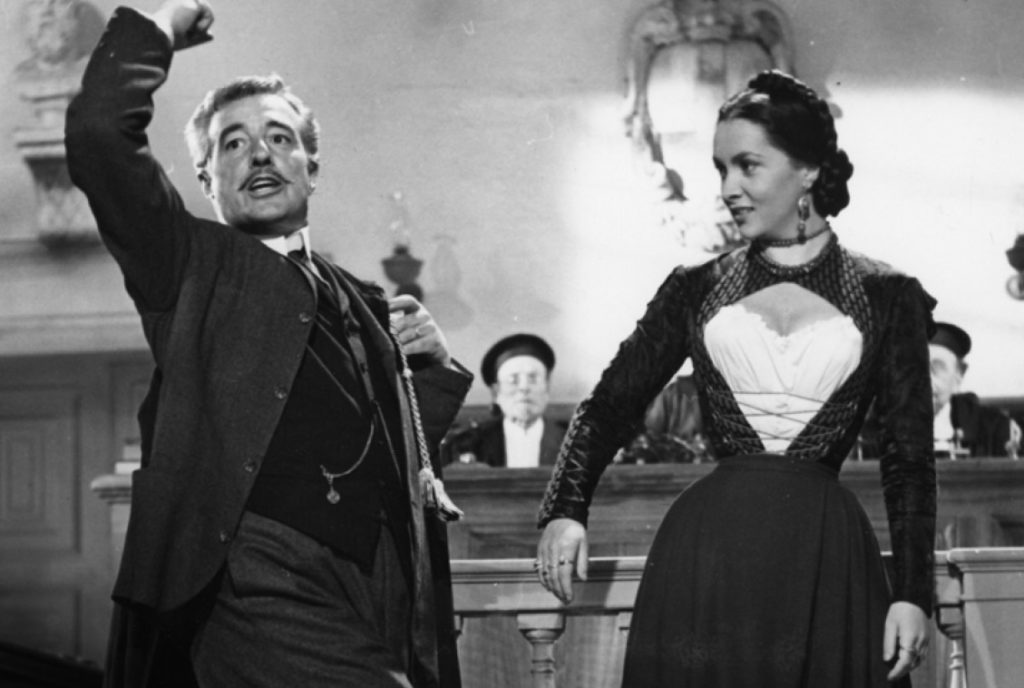 Vittorio De Sica is an utterly unique figure in the history of Italian performing arts, a revolutionary and modern breath of fresh air in a country that had never before boasted an actor on par with the famous Hollywood stars, who from the days of silent films and the earliest sound films, dominated our domestic cinemas. Moving into film after rising in the ranks in theater, thanks to his successes in variety shows and the popularity of his records, he became the first modern Italian superstar, comparable to Maurice Chevalier, Gary Cooper, and Hans Albers. But this was only the beginning of a career that ultimately had no equal, if not perhaps for Chaplin and Welles. “My artistic life has been born and reborn at least five times”, he said. Singer and actor in theatrical revues, then on stage and screen, De Sica understood, by the late 30s that while an actor might delve into his character, the director could explore all of the characters. From the moment he began directing, he shaped his actors, identi- fied with them, shared their reasoning, and took on their points of view. He turned non-professional actors into icons, and with film after film brought Sophia Loren to greater heights. He collaborated with Cesare Zavattini – they were the leaders of the neorealist movement. He won two Oscars. Then, from the 50s into the 70s, he would become one of the leading voices in Italian comedy, while remaining an auteur of seriousdramatic work as well. He won another Oscar. In his last decade he directed major international co-productions, and his last Oscar came in 1971. Between the 20s and 1974 he starred in 157 films, more than Totò (who played in 107) or Alberto Sordi(who hit 151). His performances were always measured, elegant and ironic, but both as an actor and as a director, he remained, to the end, stubbornly innovative. Not surprisingly he would continue to run afoul of the censors long after the end of the neo-realist era. He also had several phases of hispersonal life: two wives, Giuditta Rissone and Maria Mercader, two houses, two families, and three beloved children, Emi, Manuel and Christian. Since the late 30s he has been part of the collective consciousness of our country, first as Italy’s favorite romantic lead, then as the re- nowned Artist, finally as the reassuring and iconic father figure Italy could turn to in turbulent times of change. “I don’t think anyone can ever doubt just how important his presence was in Italian show business for the past fifty years, his incredible capacity to jump from one medium to another, from the most traditional, such as the theater and the press, to the most modern, such as cinema, radio and television: there are precious few actors destined to play such an important and exalted role in the social evolution of the country and the psychological development of Italians themselves, at such a key moment in the growth of our nation”(Orio Caldiron).

It was difficult selecting eight films from the daunting and diverse body of work he directed and starred in. I chose a handful of key films, perhaps not as well known to the international audience of Il Cinema Ritrovato: a wonderful romantic comedy by Mario Camerini, some of his earliest work as director, La porta del cielo (a film that served as a genuine lifeboat for De Sica and a good deal of Italian cinema during the final phases of the war), two films he starred in for Blasetti, Peccato che sia una canaglia and Il processo di Frine, destined to become, particularly the latter, classic De Sica performances, and finally his magnificent work in Generale Della Rovere, for Rossellini. This is an invitation and opportunity to rediscover the generous and multi-faceted genius of Vittorio De Sica.

In collaboration with Michela Zegna