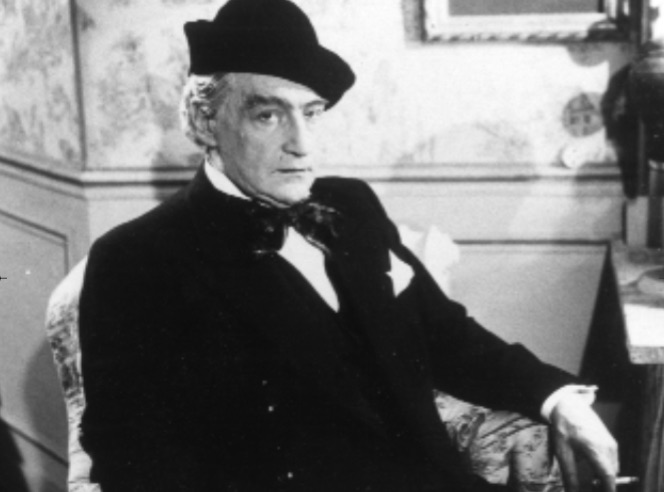 Son of the actor Lucien Guitry and the actress Renée Delmas de Pont-Jest, Sacha Guitry (full baptismal name Alexandre Georges Pierre Guitry) was born on 21 February 1885, in St Petersburg, Russia, in the course of a theatrical tour. In 1889 his parents separated and Lucien took Sacha to Russia, where he made his stage debut. At only five years old, Sacha became the darling of St Petersburg. A gifted graphic artist, his talent was first displayed as a caricaturist. Theatrical and literary celebrities passed through Lucien Guitry’s home on the Place Vendôme, and provided Sacha’s first models, which were mixed with caricatures of unknown people in his first book, Des connus et des inconnus, published in 1903. Sacha was not yet 17 when he wrote his first play, Le Page, which was followed by KWTZ, Nono, and Chez les Zoaques. In 1907 Sacha married Charlotte Lysès, an actress 8 years older than himself, whom he had met at the Théâtre de la Renaissance. They appeared together in Nono, which became his first major success.

In 1915, the young author moved behind the camera to make Ceux de chez nous, a silent film accompanied by a commentary by the author. “I assembled according to my taste, the greatest men we had, in every branch of art, and caught them in their most familiar attitudes – that is to say, at work – whenever this was possible”.

That same year Sacha made the acquaintance of Yvonne Printemps, which resulted in a break with Charlotte Lysès and the reconciliation of Sacha and his father. For Lucien, Sacha wrote Pasteur, and in 1919 created, with Lucien and Yvonne Printemps, Mon père avait raison. This was the first time that father and son appeared on stage together. Sacha continued to turn out plays: Je t’aime, Le Comédien, Le Mari, La Femme et l’amant, Jacqueline, Le Grand Duc, Le Blanc et le Noir.

On 1 June 1925, Lucien Guitry died: his last words to his son were “Do Mozart”. Yvonne would play the young Mozart.
The 1930s marked a true turning point in Guitry’s life. With his separation from Yvonne Printemps, his meeting with Jacqueline Delubac, the shooting of his first two talking pictures (Pasteur and Bonne chance!), Sacha embarked on a new period of his life. Gripped by a new passion for the cinema, which he said amused him like a madman, he filmed Le nouveau testament, Le roman d’un tricheur, Mon père avait raison, and Faisons un rêve, and in 1937 offered his first period film: Les perles de la couronne.

Remontons les Champs-Elysées marked the exit of Jacqueline Delubac and the arrival in Guitry’s life of Geneviève de Séréville. Then came the war years, and while Sacha continued to act, to film, to move in society, and to organize charity galas, France was occupied by the Germans. With his Ils étaient neuf célibataires, Sacha Guitry made audiences roar with laughter; his play N’écoutez pas mesdames ran from 1942 to 1944. He would not be forgiven, however, for the title of his book in homage to French genius – De Jeanne d’Arc à Philippe Pétain. La Malibran, shot in 1943, was to be his last film of the war years.

On 23 August 1944, Sacha Guitry was arrested, and imprisoned for 60 days. The wound remained deep: three years of silence, followed by a book, Quatre ans d’occupations (Paris, Solar, 1954). In 1945 he met his last wife, Lana Marconi. With Le Comédien, Sacha paid new homage to his father; with Le Diable boiteux, he settled accounts with the censors and evoked his own recent bitter experience.

In 1957, two months before his death, his last film, Les trois font la paire, was released. “Though I had to wait to be ill to have the delight of reading your works – it was worth the trouble”, Guitry wrote to Georges Simenon, whom he admired…