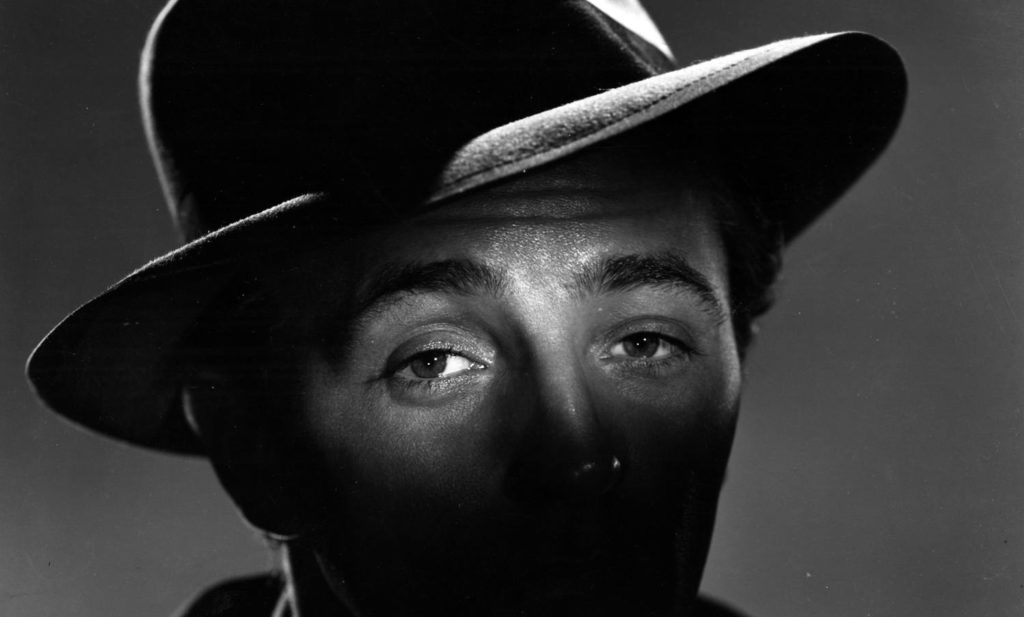 The long and wondrous career of Robert Mitchum has three periods: the hollow-cheeked and haggard Mitchum of The Story of G.I. Joe, plus what just preceded (Hopalong Cassidy quickies) and what just followed (being RKO’s male cash-cow, the other udder being his female equivalent and life-long pal, Jane Russell). With features seemingly going every which way, a long nose, slitty eyes and a wasp waist on a colossus physique, nothing in him had the classical beauty of contemporary leading men. Then he became incredibly handsome (round the bend of River of No Return), an unstoppable mix of nonchalance and virility. That period would last a long time, until (just after The Yakuza, say) he started wearing wonky glasses off screen and his features started to melt more and more like tallow.
We privileged the central, luminous period, and the two sides of his screen persona. We mostly remember his ‘Baby, I don’t care’ mode – either royally morose as in Out of the Past, or the magnificently detached and mischievous adventurer (Bandido!, His Kind of Woman), but we cherish Mitchum even more when vulnerable: his haggard look in the opening sequence of Blood on the Moon, but mostly the split character he plays in Robert Parrish’s truly marvelous The Wonderful Country, where he is successively diminished by his own horse (who falls on him, breaking his leg), by a Texas Rangers captain (Albert Dekker, who is a head taller than him), and by his Mexican master Pedro Almendáriz in front of whom he begs his back pay, sombrero in hand.
It has been said that there are the films he invested himself in (even if he regretted it afterwards), and the others. The Friends of Eddie Coyle and The Yakuza are among the former. From these two decades we remember of course his baroque performance in The Night of the Hunter, but also the pipe-smoking patriarch he plays in Home from the Hill, one of the great curios of his filmography: he plays the über-macho father in a hysterical melodrama about manhood and patriarchy, a problematic father-son relationship being one of Minnelli’s signatures. But then, any Minnelli picture dealing with virility could only be Shakespearian and override the normal standards of melodrama.

THE STORY OF G.I. JOE

THE STORY OF G.I. JOE

OUT OF THE PAST

OUT OF THE PAST

RIVER OF NO RETURN

RIVER OF NO RETURN

BLOOD ON THE MOON

BLOOD ON THE MOON

HOME FROM THE HILL

HOME FROM THE HILL

THE FRIENDS OF EDDIE COYLE

THE FRIENDS OF EDDIE COYLE