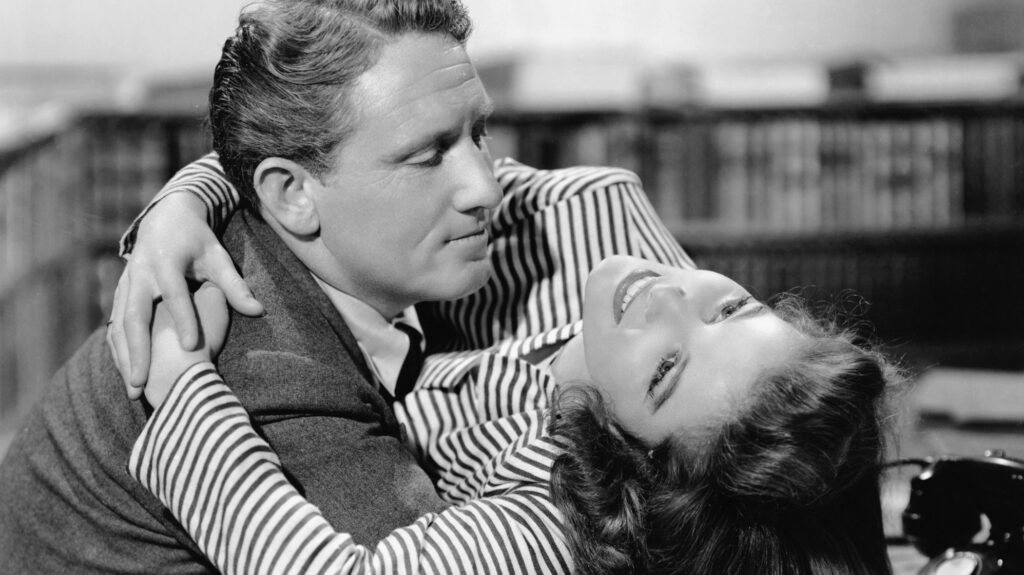 Theodor Adorno said “To write poetry after Auschwitz is barbaric.” Paradoxically, George Stevens’s involvement with and filming of the liberation of Dachau added a poetic weight to his world, hitherto concerned with lighter matters. There’s another angle to consider: if someone like Stevens hadn’t filmed the death camps, the philosopher couldn’t see it and firmly reach a conclusion about the nature of the world we live in. In other words, as Jean-Luc Godard suggested, “If George Stevens hadn’t used the first 16mm colour film in Dachau, Elizabeth Taylor would never have found a place in the sun.” Stevens, aware of this paradox, confirmed that making films such as A Place in the Sun and The Diary of Anne Frank was indeed “Like being a traffic cop and writing a poem at the same time.”
He was an American artist who left a profoundly rich body of work behind; an intense individual who instead of commenting on the material, was, in John Huston’s words, “living it.” Stevens was deadpan, curt and stone-faced – often compared to a Native American chief. An inveterate master of slow filmmaking, he was a searcher, in both the technical and philosophical sense, whose ubiquitous influence on movies can be felt to this day. He was heavily reliant on editing, keeping his ideas about each film loose and flexible during shooting. He readily embraced improvisation, last-minute changes and expansion. Additionally, no other director was more interested in the poetics of reception than Stevens was.
Stevens rose from the rank of camera-cranker at Hal Roach Studios, where he shot Laurel & Hardy comedies, to become a filmmaking ace and comedy specialist in the 30s (Swing Time). A director, writer and producer, he was the absolute master on the set. Fighting and filming the war changed his vision (Something to Live For). This newly gained intellectual maturity, combined with his usual fluency and brio, became a fertile ground for directing an array of masterpieces which, along with a survey of his late 30s and early 40s masterpieces, are the main focus of this retrospective. We’ll leave Stevens’s world as Alan Ladd rides out of the valley in Shane. As much as there’s an air of closure with this departure, there’s also a great deal of human glory – and a clear signal from the film to the world, of characters always in search of something to live for. This programme was prepared in and out of lockdowns, and in that time, Stevens’s films themselves became something to live for.

Il Cinema Ritrovato wishes to thank George Stevens Jr. for his generous help and support in the preparation of this tribute.

THE TALK OF THE TOWN

THE TALK OF THE TOWN

THE MORE THE MERRIER

THE MORE THE MERRIER

SOMETHING TO LIVE FOR

SOMETHING TO LIVE FOR

WOMAN OF THE YEAR

WOMAN OF THE YEAR

A PLACE IN THE SUN

A PLACE IN THE SUN