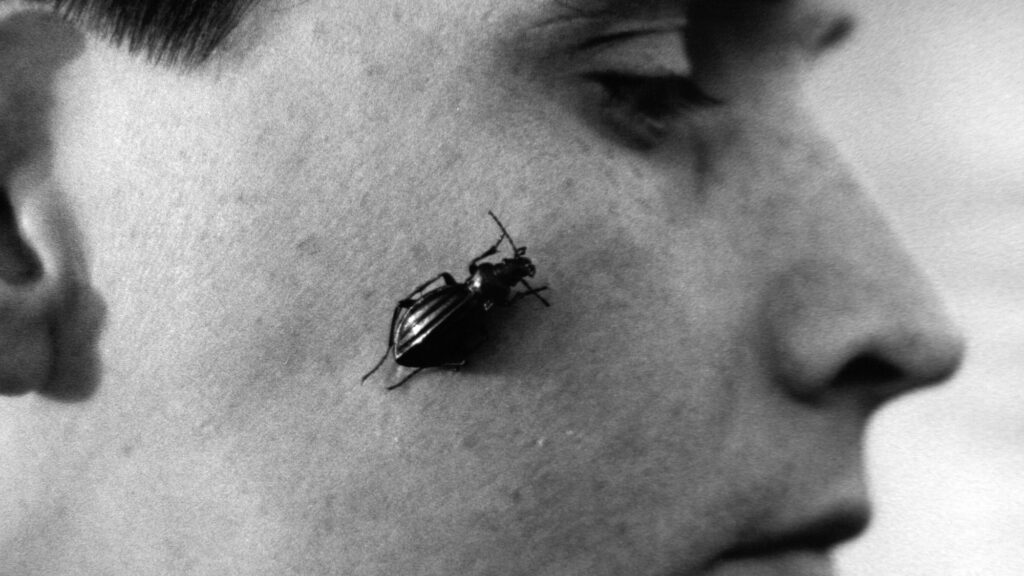 German-born Peter Weiss (1916-82) fled with his family to Sweden from Bohemia, Czechoslovakia, in the 1930s to escape the Nazi occupation. There he became one of the central figures of Svensk Experimentfilmstudio, founded in 1950 to produce and promote art and experimental film in Sweden (later renamed Arbetsgruppen för Film). Multi-disciplinary artist Weiss – painter, poet, novelist, playwright, and filmmaker – made his debut in the early 1950s when he made the first films in a series of black-and-white shorts named Studie I-V (1952-55). In these films he drew upon the tradition of modernist painting and filmmaking from the 1920s in his depictions of the body and the human condition.
In the latter half of the 1950s, Weiss also started to make short films with more documentary content. In Ansikten i skugga (Faces in the Shadow, 1956) he portrays outcasts in Gamla Stan, the oldest part of Stockholm, and Ingenting ovanligt (Nothing Unusual, 1957) is a commissioned film about a traffic incident, which the filmmaker turns into a poetic portrait of the city. Together with arguably his best short Enligt lag (According to Law, 1958) – a depiction of life in a juvenile prison – these films give stunning testimony to Weiss’s eye for detail and ability to find human dignity even in the most difficult circumstances.
After his amazing feature-length film Hägringen (Mirage, 1959), a highly personal take on the city symphony genre, Weiss participated in the production of the fiction feature Svenska flickor i Paris (The Flamboyant Sex, Barbro Boman, 1961), and made a film in Denmark about anonymity and conformity in modern suburbia (Bag de ens facader, Living Behind Identical Facades, 1961).
Weiss is – especially in Germany – generally more known for his literary work as a novelist and playwright. His magnum opus is the epic anti-fascist novel/manifesto Die Ästhetik des Widerstands (The Aesthetics of Resistance), published in 1981, and his most famous play is Marat/Sade from 1964, later adapted for the screen by Peter Brook.
Arbetsgruppen för Film continued to produce art and experimental films well into the 1980s and evolved into Stiftelsen Filmform / The Art Film & Video Archive, distributing experimental films on 16mm and in digital formats. Filmform also acts as the rights holder to Weiss’s short films on behalf of his widow Gunilla Palmstierna-Weiss (a production designer who collaborated several times with Ingmar Bergman at the Royal Dramatic Theatre in Stockholm), who generously authorised the screenings at the festival. The programme includes vintage prints as well as new digital restorations, all from the Archival Film Collections of the Swedish Film Institute.