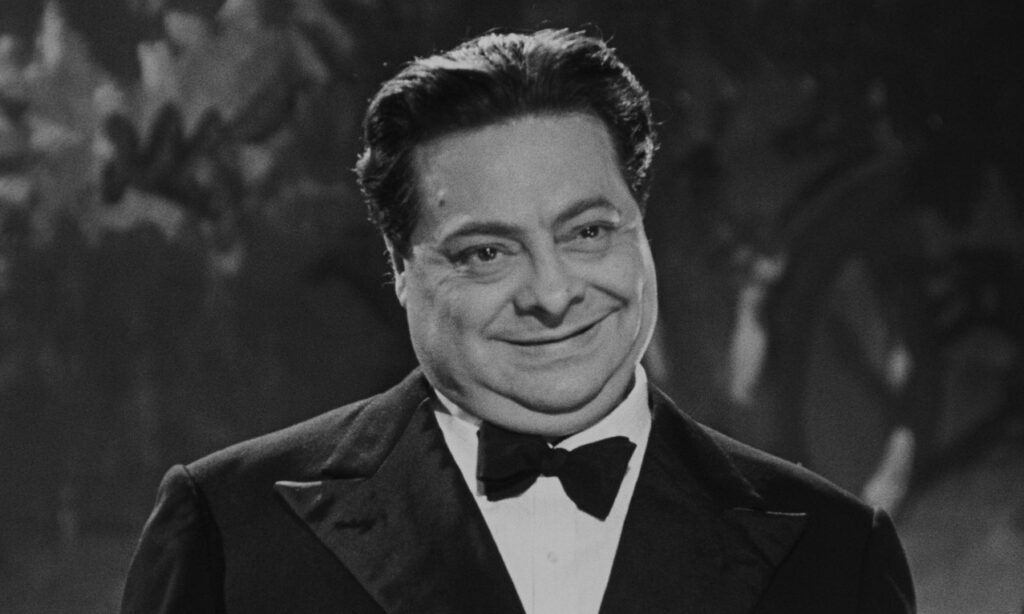 Known to Italian audiences as the expression of a lovable working-class and lower middle-class Rome and to international viewers for his role as the priest in Rome, Open City, Aldo Fabrizi was one of the most popular comic actors in Italy after World War II. The son of fruit-sellers, he quit school early for a variety of jobs, writing poetry in dialect and monologues that made him famous in the variety show world. Created from observations of everyday life, his characters (the tram driver, the doorman) landed on the screen towards the end of the fascist period, in films now considered the direct predecessors of neorealism (Avanti c’è posto…, 1942, Campo de’ Fiori, 1943, by Mario Bonnard). After Rome, Open City Fabrizi’s comic roles took on a moving and melancholic streak, from his first successful films such as Mio figlio professore (Professor, My Son, 1946) by Renato Castellani and Vivere in pace (1947) by Luigi Zampa to Guardie e ladri (1951) by Steno and Monicelli, the first of four movies in which he co-starred with Totò. In the early 1960s, the most successful years of Fabrizi’s career came to end, and he even made a return to theatre in Rugantino, a re-creation of folkish 19th-century Rome. Indeed, he will forever be connected with a Rome that was still papal and fascist, preceding the era of comedies about economic and cultural modernity, with the successful films of Gassman, Sordi, Tognazzi and Manfredi. In the final years of Fabrizi’s career, in addition to various television appearances, he gave a final memorable performance in C’eravamo tanto amati (1974), in which Scola had him portray a terrible and monstrous version of his characters.
Only recently has his directorial work been reconsidered. Nine titles between 1948 and 1958, some of which were contemporary melodramas (Emigrantes, 1948, or Una di quelle [One of Those], 1953, starring Totò and Peppino De Filippo), while the three films about the Passaguai family get their humour from variety shows, but with a surreal twist. At the time his directing was not well received by critics, who were puzzled by his mix of comedy and pathos and love of sketches; but today his distinctive style hints at a deeper side of the actor’s world, which prefigured comedies of the Italian economic miracle in two ways: a penchant for melancholy and the minute and ultimately bitter observation of a nascent bourgeoisie.
Fabrizi was often a co-creator of his films, working on storylines and scripts, sometimes a producer. Inevitably he was the focal point of each scenes he appears in thanks to his peculiar physicality: his corpulent figure and fuzzy voice, but with movements that could suddenly become childlike or effeminate, demonstrating an inability to fit in with polite society – a contradiction and an awkwardness that would bring life to many vivid incarnations.

A while ago in Rome I happened to run into Aldo Fabrizi, whom I hadn’t seen in years. How many years? Many, many years… While we were shaking hands, I figured that there weren’t enough fingers on our interlocked hands to count them: our hands, mine and his, clasped again in a sincere outpouring of affection. And with great kindness, a few days ago, Fabrizi was inscribing a copy of his new book, La pastasciutta, for me, and he referred to me not as a writer, not even as a director, but as a “gifted actor” in film. We had worked together in Rome right after the war, on a film: Renato Castellani’s Professor, My Son, one of the many movies, at that time, in which Fabrizi played the lucky, funny and sentimental main character, as he deserved.
Because in those years of plein air and, I have to say, of a facile and rash populism, Fabrizi was not just funny. He was touching, poignant, moving. With Rome, Open City he adapted to the tragic story perfectly. No one knew how to tweak or when to add that touch of ‘volemose bene’, that Roman impulse to get along, like Fabrizi did. And no one was better at drying damp eyelashes, the tear that suddenly appeared, pretending to hide it as a cold or with the rough back of his hand.
We shot on location, through the narrow, winding streets of Rome’s city centre. And for as long as we worked on the film, I got to study up-close how Fabrizi gradually created his character. All of his comic and moving effects came from the ‘gut’: from the unavoidable contrast between his fat, heavy, well-fed body and his surprisingly agile movement. I saw Fabrizi grumble, huff and puff, sweat, pull at his collar, roll his eyes, open them wide and, all of sudden, almost do a dance step, an airy and elegant pirouette.
That’s how Aldo Fabrizi became Fabrizi, almost a persona: an actor-character, a mime. He made delicate movements that contrasted with the bulk of his body, and were for that reason all the more hilarious. I admired Fabrizi’s clumsy affectation, those polite faces, those grimaces, those affected, almost feminine, mannerisms and the graces of a commoner enamoured with good manners. Like all true actors, Fabrizi had picked up on a genuine characteristic of his own people: advancement, the search at every cost for ‘distinction’, which in certain Roman folks turns into an enthusiasm, a pursuit of an elegant word or expression. With his moves and gestures, Fabrizi poked fun at the zest of some plebeians to move around on ‘tiptoe’. (3 November 1970)