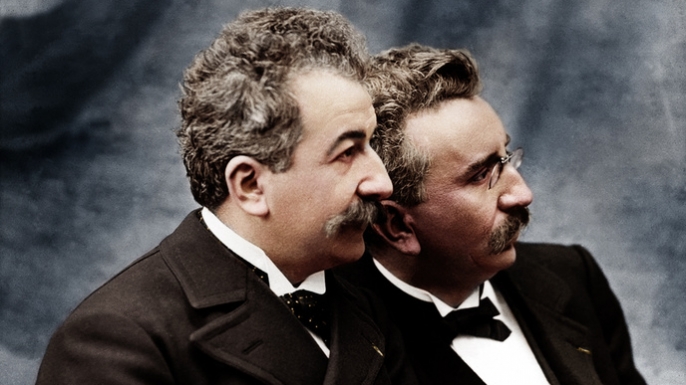 When the year 1896 began, Louis Lumière had made ten views, and animated photographs had been screened and seen in public in one place on earth, Paris. At the end of the year, there were over three hundred Lumière views, the company employed several operator filming in all five continents (on December 30, 1896, Constant Girel was busy in Saigon and on his way to Japan), and enthusiastic audiences had attended public screenings all over Europe, in Mexico, the US and Algeria. Motion pictures finally worked, and their success was immediate.
The Lumière brothers did not sell their wondrous Cinématographe that year, forcing rivals to use other types of cameras. Méliès started to make and show films in the spring of 1896 using a Theatrograph manufactured by Robert William Paul. In autumn, the American Mutoscope Company launched their Biograph and embarked on a remarkable production using a 68mm format.
About a hundred ‘projections’, ‘views’ or ‘animated photographs’ – as films were called then – made in 1896 will be presented in this section dedicated to the first year of cinematography. Their quality ranges from impressive to breathtaking. Being of a double nature – historical documents and works of art – they bring into play both knowledge, the necessity to learn about the past, and esthetic experience, the capacity to understand them in the present. Much research has been done since 1946, when Georges Sadoul asked Louis Lumière questions about the past; great minds have attempted to explain (or at least describe) the force of these films, their light, richness and beauty, the way they captured life and opened our imagination.
As for format, our programs follow the historical template of 1896, when a show usually included eight to twelve titles. Contentwise, two of the programs are geographical (Italy and Mexico), while the others are what Benjamin called “physiognomical”; they highlight certain characteristics of the Lumière production. The collection Olivier Auboin-Vermorel presents in Recovered and Restored with rare hand-colored views Lumière and films shot in 1896 by Paul Nadar is the perfect complement to this section.
Our warmest thanks go to the Institut Lumière in Lyon, to the CNC – Archives français du film, to the Cinémathèque française and to many colleagues and friends for their generous help.

1896. Year One of Cinematography, Jacques Becker – The Very Idea of Freedom

The Beauty of Lumière films

The Beauty of Lumière films

Museum of the here and now – Actualities / Spectacle. The Power of the Cinématographe

Museum of the here and now – Actualities / Spectacle. The Power of the Cinématographe

Museum of the here and now – Actualities / Méliès Star Film 1896 / Spectacle. The Power of the Cinématographe

Museum of the here and now – Actualities / Méliès Star Film 1896 / Spectacle. The Power of the Cinématographe