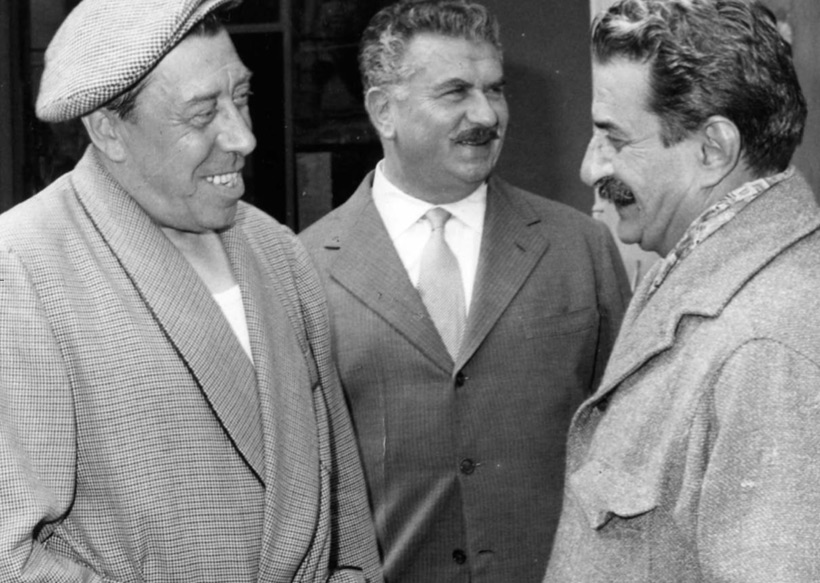 The adventures of writer Giovannino Guareschi in the tinsel town of dreams, mirages and tricks which is cinema, started with a project in the late Thirties where his participation was lost amidst the contribution of many other humorists for a vehicle-picture made for Macario (Imputato alzatevi! by Mattoli, 1939). For a while the experience seemed to remain the only one for the author of La scoperta di Milano, but his adventures later continued with the unfortunate attempt to adapt his short stories – Gente così (1950) – to the screen, as trumpeted on billboards by the misleading claim “a Guareschi’s film”. However, starting from 1952, they reached their apex in the sensational international success of the five films of the series dedicated to don Camillo and Peppone, making of the characters played by Fernandel and Gino Cervi two popular archetypes symbolizing the 1950s. The adventures ended with a half-hearted participation in a small movie inspired by Europa di notte (Gli italiani si divertono così, 1962), and in particular with the bitter satirical pamphlet of La rabbia (1963), marking the first and only appearance of Guareschi on billboards, with his scowling face half hidden under the brim of his hat. But the image which recalled an election (or a “Wanted”) poster was taken only as a pretext for contrasting it with Pasolini’s (the author of the first part of La rabbia), but in reality their challenge was groundless as no contact points could ever be found between the two, divided as they were by an insurmountable chasm.

Ironically, Guareschi’s most fortunate experience with cinema – Don Camillo’s saga – was considered by the writer as a long and unpleasant career snag. Every film put the writer from Fontanelle in a bad mood, as every time he raged against the tampering with his stories, with settings created anew and in particular, with the watering-down of his deeply-rooted anticommunism. In reality, it was also by the work of Duvivier that the screen made Guareschi’s stories immortal, by outlining his marginal and visceral humanity whose excesses could be balanced only by religious submission. It is the soul of a “petty world” coinciding with a still rural, pre-industrial and truly rustic and primitive Italy (but petty bourgeois, countered by the popular and proletarian Italy loved by Pasolini, who for this reason was utterly incompatible with Guareschi).

As a humorist, Guareschi had always looked at cinema as a 19th-century moralist would, a threatening Babylon, a hotbed of corruption and decadence. As writer of stories, he presented cinema with lively and vital characters with their shortcomings and naivety (made immortal by two master actors, Fernandel and Gino Cervi), a muscular and often cutting humour, a series of situations and settings evoking a distant rural landscape, enabling us to decipher today the humbleness, moods, fears and pretensions of an Italy soon to be swallowed up by television. And TV took the brunt of some of Guareschi’s last satirical writings, and it is easy to imagine that he would have cringed in horror at the sight of his readers being transformed into an amorphously brutish mass of TV watchers.

We will never see the film that Guareschi dreamed of making while he was in jail: the story of the Franciscan monk, father Lino (Alpinolo) Maupas (1867-1924), anti-conformist, generous and ebullient, “a monk stealing from the rich to give to the poor, defending the red rev- olutionaries, never hesitating before entering brothels to beg from prostitutes clothes and money to share with the poor children from Oltretorrente”. From his notes it would seem that in father Lino Guareschi had thoroughly explored themes which he had just sketched in don Camillo’s stories. And it was his mistrust for the town of cinema that in the end stopped him from pursuing the project.