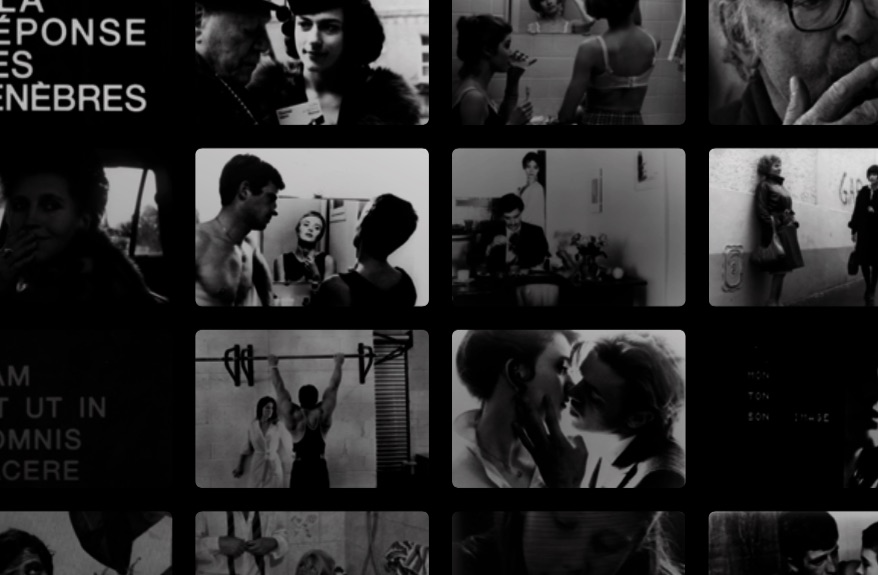 It was Nicole Brenez, in the publication she edited for the exhibition at the Pompidou Centre (Jean-Luc Godard – Documents, Editions du Centre Georges Pompidou, Paris 2006), who re-opened the debate on the idea of a Godard ‘corpus’, including within it every type of ‘opus’ in whatever form or material it reveals itself. As far as films themselves are concerned, Brenez added to the traditional Godard filmography the titles of thirty advertising trailers that Godard himself made, from those of À Bout de Souffle (Breathless) to Notre Musique (Our Music), plus that of Mouchette by Bresson – a surprise entry on the list.

It is worth remembering how a few years ago also Jean Douchet, reviewing the release of a DVD set of six early Godard films in “Cahiers du Cinéma”, chose to linger on this occasion precisely on the director’s trailers rather than on his films. Furthermore, Godard himself recently decided to insistently call attention to this so-far neglected aspect of his repertoire with the spectacular circulation on the internet of four different and consecutive bandes-annonces, or trailers of Film Socialisme (Socialism), which vary in length and in the pace at which the film unfolds.

This dossier by Cinema Ritrovato, which brings together most of Godard’s trailers and a few other examples of ‘very brief’ films (also built on quotation or self-quotation, and including Une Catastrophe, the wonderful trailer screened at the Vienna Film Festival, and the two Prières pour Refuzniks), is thus offered as a small-scale construction site for discussion on Godard’s method, his ability to make cinema with every means and his capacity to create little masterpieces – works that are perfectly accomplished despite the extreme fleetingness of their production purpose. By ‘announcing’ the key words, the directions and the characters, and by destructuring the images and titles, the sounds and music to the film that has only just been finished, the bande-annonce turns into a critical review of the film itself. Inevitably Godard the ‘critic’ applies the practice of quotation and détournement, of mincing and re-editing, to the fragments of his own films. As he already did so masterly in the ‘scenarios’ on video (preceding and often following the films themselves) and in the broad constellation of the Histoire(s) du Cinema and their satellites.