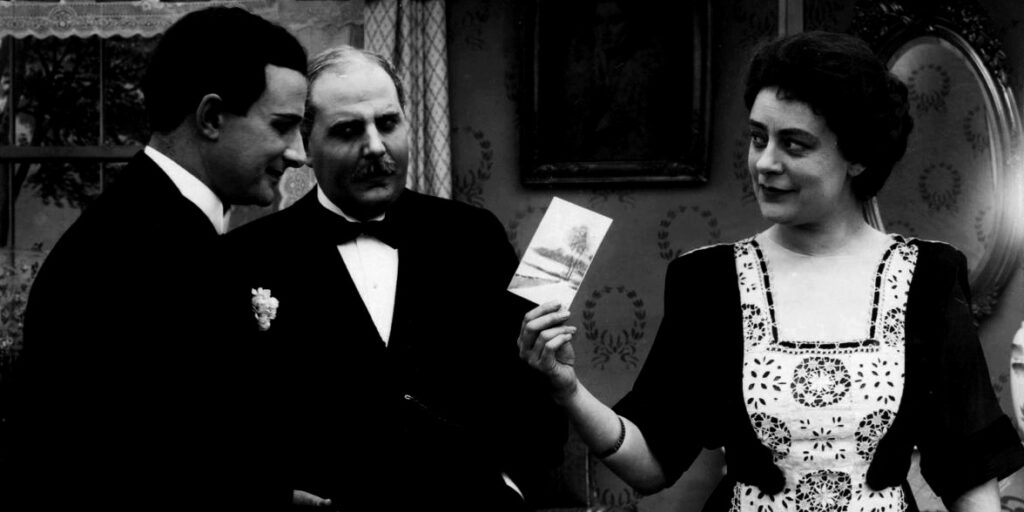 Tomijiro Komiya (1897-1975) was born in Asakusa, where his father owned a restaurant. Asakusa is the entertainment district of Tokyo, and Komiya later in life remembered how as a child of nine or ten he went to the movie theatre, only a few minutes from home. He probably started collecting films as a youngster, maybe asking projectionists in the neighbourhood for snippets or frame cuts. His film collection must have been large already when in 1917, aged 20, he took over the management of the restaurant after his father’s death; the majority of titles in the collection were produced before that date. When his house burnt down in the Great Kanto Earthquake in 1923, a (possibly important) number of films may have been destroyed, but the collection survived the Pacific War, since it had been moved into storage elsewhere, while the house and restaurant in Asakusa were devastated again by an air raid in 1944.
Except for three US titles (including a print of Shoes by Lois Weber) Tomijiro Komiya collected only European films. The Japanese market was dominated by French cinema until around 1913, when Italian and German films seized a share of the imported film market. Komiya was a fan of European cinema in general, but he especially loved Italian films, and his collection now is rich in unique prints of S.A. Ambrosio and Film d’Arte Italiana (unfortunately the prints of other Italian production companies have not resisted chemical deterioration and decomposition so well). Komiya was not interested in the political or ideological aspects of cinema. For him as for many film fans in Japan, Italian films supplied the bright sunshine of southern Europe, graceful actresses and actors, adventures in imaginary countries and brilliant stencil colours. Almost all the prints in the Komiya collection are tinted and toned films or, in the case of Pathé fairytales and Film d’Arte Italiana dramas, stencil-coloured. In the 1920s, when European releases became rare in comparison to the US imports on Japanese screens, a new generation of film fans nourished by a mostly American film diet and ignorant of European cinema of the Belle Époque became influential critics. This was when Komiya acquired his last prints, of choice European films: Sylvester (1923), Maciste all’inferno (1926), La Chute de la maison Usher (1928) and Gardiens de phare (1929).
When in 1988 Komiya’s son donated the collection to the National Film Center – National Museum of Modern Art, Tokyo, most prints were discovered to be fatally damaged. Whatever could be saved was saved. Preservation work was carried out at the Ikueisha laboratory, using Fujicolor negative 8510F-64. We continue to dream of the first version of Addio giovinezza! (1913), of Luigi Maggi’s Satana (1912), Murnau’s Satanas (1919) and all the other lost films that Tomijiro Komiya once had in his collection.

This programme realises a long-cherished dream. Destiny had arranged for one of us to be in Tokyo in 1991-1992, when 62 newly restored titles from the Tomijiro Komiya Collection were screened at the National Film Center – National Museum of Modern Art, Tokyo (now the National Film Archive of Japan or NFAJ). Prints from this marvellous collection, generously lent by our colleagues in Tokyo, have enriched past editions of Il Cinema Ritrovato, and in 2014 led to the restoration of Addio giovinezza! (Augusto Genina, 1918) from the only element known to exist, a duplicate of a now lost Komiya print.
When Hiroshi Komatsu proposed a Komiya programme for the festival, we were overjoyed. We decided very early on to avoid the obvious: we would not present a selection of the 20 or so miraculously complete prints, the highlights, so to speak, but would revisit the whole collection (of about 160 items) and explore its unknown parts. As a result, 44 of the 56 elements presented here are screened for the first time ever in public.
The cans that Hiroshi Komatsu opened in 1988 contained mostly remnants. Many films had totally decomposed (close to nothing of the Gaumont and Cines productions had survived), and as for the others, only fractions could be preserved. The loss is great, but in a paradoxical way, fragments do have a hidden strength. They offer maximal density in a minimum of time. Following their suggestions, their physiognomy, we have edited eight programmes that give an overview of the first golden age of European silent cinema, present some important performers and production companies and outline distinctive topics, motives, genres and aesthetic and narrative strategies. Enter the maze and be astonished.
Our thanks for a wonderful time of working together on this project go to Hiroshi Komatsu, to Mika Tomita, Masaki Daibo, Chizuru Usui and all the staff and curators of the National Film Archive of Japan. We are grateful to Akira Komiya, Iku Sekiya, Sawako Ogawa for their support, and to Ivo Blom,
Gianna Chiapello, Claudia Gianetto and Giovanni Lasi for their help in identifying films.

All the films in this section come from the Tomijiro Komiya collection in the National Film Archive of Japan. They are screened in 35mm prints struck in 1990-1991 from the original nitrate prints. The exception is the final scene of Dans l’Hellade (1909) which was discovered among the Komiya fragments, labelled No. 9535 and which we will be screening from a DCP after the 35mm print from a stencil-coloured nitrate print preserved by Cineteca di Bologna (Daniele Casagrande collection) that is missing the final scene.
Tinted, toned and stencil-coloured prints were reproduced via internegative on colour stock and are indicated here by ‘col.’ or ‘col. from a stencil-coloured nitrate print’. For unidentified elements, the archival ID number and appropriate key words in square brackets are given instead of a title. Brackets are also used for hypothetical titles and attributions.
For fragments and incomplete films, the original length of the work is indicated wherever we could retrieve the information. In several cases, the images are all present, but the intertitles are absent, possibly cut for screening with a live narration which explains differences in length for otherwise complete works. Source archives for more complete elements have been indicated, but it has not been possible to do a systematic search for them beyond the FIAF database. Please do share information about any other existing elements you know of with the curators and the NFAJ.