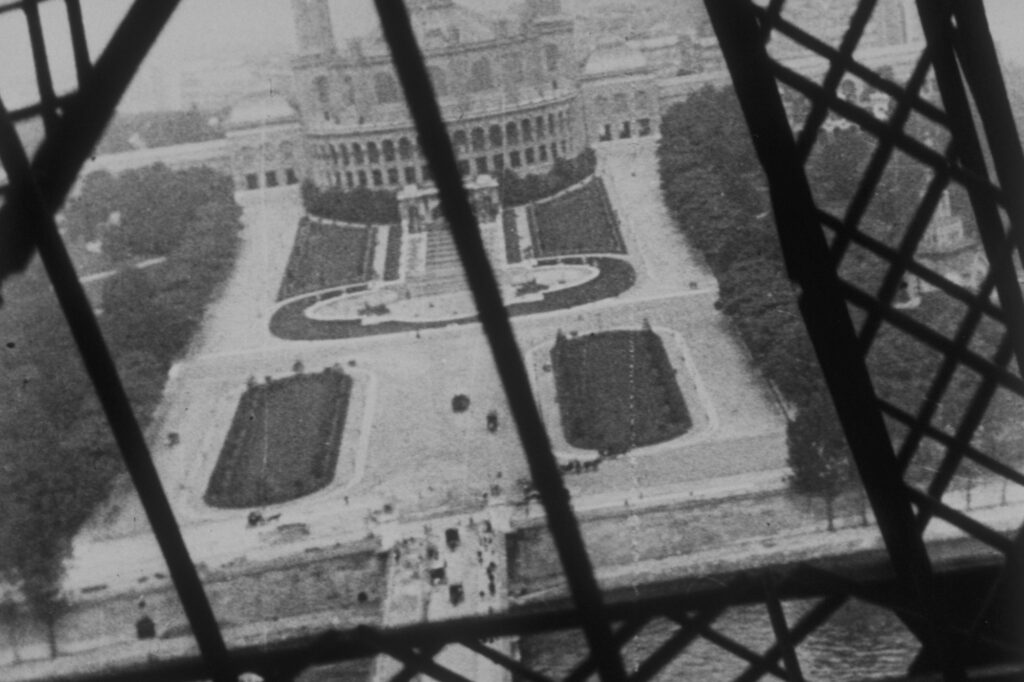 The timing was perfect. Cinematography made its first appearance in 1895, and it had a few years’ headstart so as to arrive at the threshold of 1900 in great shape. But the new century did not trigger an unambiguous rush to modernity. Yes, in 1890 Albert Robida had predicted video-concerts via téléphonoscope for 1955 (in his fantastic novel The Twentieth Century: The Electric Life) and the 1900 Paris Expo celebrated “the young and shining Fairy Electricity who endows contemporary industry with two crucial elements: movement and light”, as one J. Trousset enthused in 1899. However, the same Robida designed for the same Paris Expo a medieval Vieux Paris that proved a bigger success with the public than the many screens, small or giant, with or without sound, showing moving images. Still, with 12 stands of cinematographic materials and 17 screening spaces, the Expo was a prestigious milestone for cinematography (to paraphrase Emmanuelle Toulet’s survey from 1986). And it was a rallying point for cinematographers from all the world: everybody with a movie camera filmed it. Our 1900 series somehow took not the shape of a panorama but rather of a centrifugal field of dissemination with a central point. Visiting Paris, young Giancarlo Stucky bought a 15mm Gaumont amateur camera, and back home in Venice recorded images that meet our old, offended eyes with heartrending vivacity and breathtaking immediacy. Engineer Sieurin from Höganäs also acquired a (regular 35mm) camera in Paris plus a score of Gaumont films and became a Swedish film pioneer. Joe Rosenthal from London went to South Africa and China to cover the Boer war and the Boxer Rebellion. The midpoint is represented by some of the cinematographic attractions featured at the Paris Expo – Lumière vues screened in the Cambodian Pavilion and the Galérie des Machines (a venue bigger than Bologna’s Piazza Maggiore) and filmed stage acts with played sound-on-cylinder from the Phono-Cinéma-Théâtre. Or perhaps, was the epicentre elsewhere and a star rather than a point? In 1900, Georges Méliès, strikingly absent from the Expo with its non-fiction films promoting nations and consumer goods, catered to audiences in music-halls, itinerant shows and his own Théâtre Robert-Houdin delighting them with marvellous trick films, a Jeanne d’Arc of monumental length (250 m) and the enchanting Rêve de Noël, made with the ambition “to create a work as artistic as possible, but also amusing and interesting”. He succeeded.

Recovered and Restored, Century of Cinema: 1900