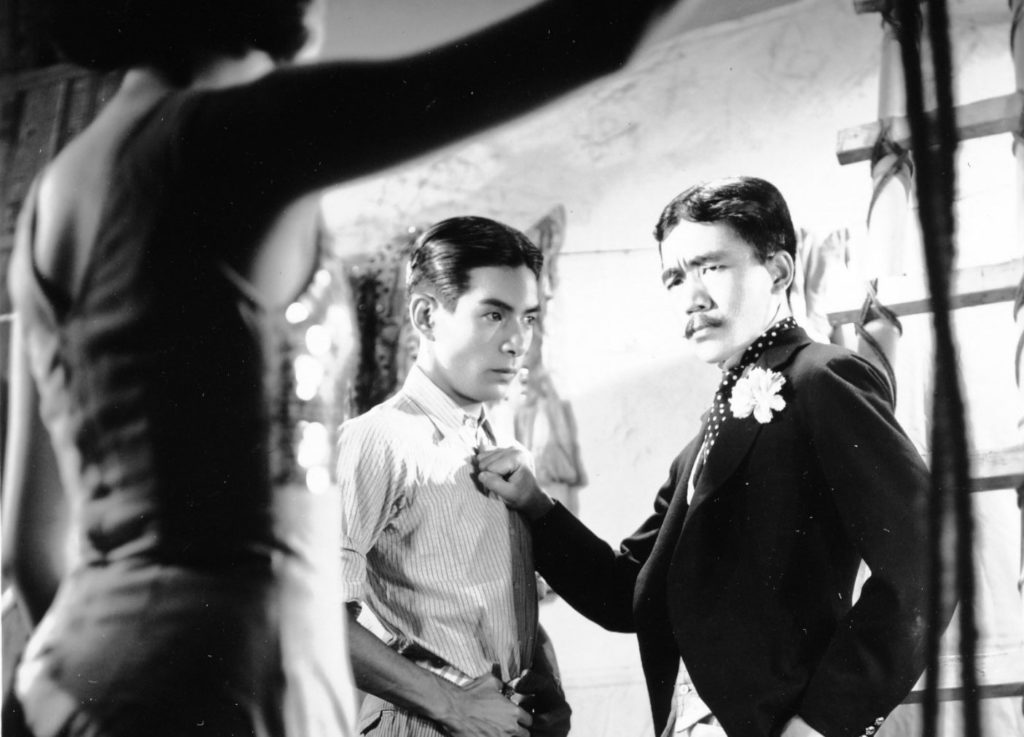 During the early 1930s, despite such pioneering successes as Heinosuke Gosho’s Madamu to nyobo (The Neighbour’s Wife and Mine, 1931), fully-fledged talkies had remained a definite minority in Japan. But by the middle of the decade, sound technology had become more widely disseminated as both studios and theatres invested in the new medium. In 1933, the Tokyo-based P.C.L. (Photo Chemical Laboratory) and the Kyoto-based J.O. Studio had begun production with the remit of producing sound films exclusively. But the transition to fully integrated talking pictures was a slow one. Although a considerable number of films made limited use of ‘sound’ technology (e.g. part-talkies, films shot silent with added music or sound effects, etc.), it was not until 1936 that the majority of films produced in Japan were full talkies. The period thus marks an almost unique instance in which sound films were made alongside silents, and in which the aesthetic potential of new sound technologies was gradually assimilated and developed. Japan’s social and political situation too was in an era of transition. The fragile liberal and democratic consensus of the 1920s had unraveled as the military took an increasingly assertive role in politics. A prosperous bourgeoisie retained somewhat Westernised lifestyles, but nationalist sentiment was growing. In an era of economic depression, urban salaried workers faced a new insecurity, while rural regions remained in extreme poverty. Despite tightening censorship, these social and economic concerns were reflected in the varied and creative cinema of the period. This second part of an ongoing retrospective of early Japanese sound films focuses on three studios active in this key period. The work of P.C.L., with its stress on musicality, city life and its at times trenchant social commentary, highlights the troubled modernity of 1930s Japan. Catering to the more prosperous urban middle class, musicals such as Ongaku kigeki: Horoyoi jinsei (Tipsy Life, 1933) are evidence of a modern consumer culture with their sophisticated use of product placement and multimedia tie-ins. Yet P.C.L. also confronted the social and personal concerns of interwar Japan, its economic and regional divisions, in realist and socially critical dramas such as Futarizuma: Tsuma yo bara no yo ni (Wife Be Like a Rose, 1935) and Ani imoto (Ino and Mon, 1935). J.O. Studio, with which P.C.L. would ultimately merge into Toho, shared some of these concerns, and is represented here by Ongaku eiga: Hyakumannin no gassho (Chorus of One Million Voices, 1935), a musical similar in tone and milieu to those of P.C.L. In addition, its base in Kyoto allowed it to produce numerous jidaigeki (period films), most sadly lost or unavailable today. The jidaigeki was also the speciality of Nikkatsu, a studio whose history stretched back to 1912 but which now sought to fuse traditional narratives with the new sound technology, creating a distinctive style of realist period drama. This is exemplified in particular by the work of two great filmmakers, Sadao Yamanaka and Mansaku Itami, whose subversive outputs are represented respectively by the downbeat yet darkly witty Kochiyama Soshun (1936) and the sparklingly satirical Akanishi Kakita (1935), made by star Chiezo Kataoka’s own production company but distributed by Nikkatsu. Taken together, the work of the three studios exemplifies not only developments in sound film, but also eloquently expresses the tensions and transitions in Japanese society during this critical period.