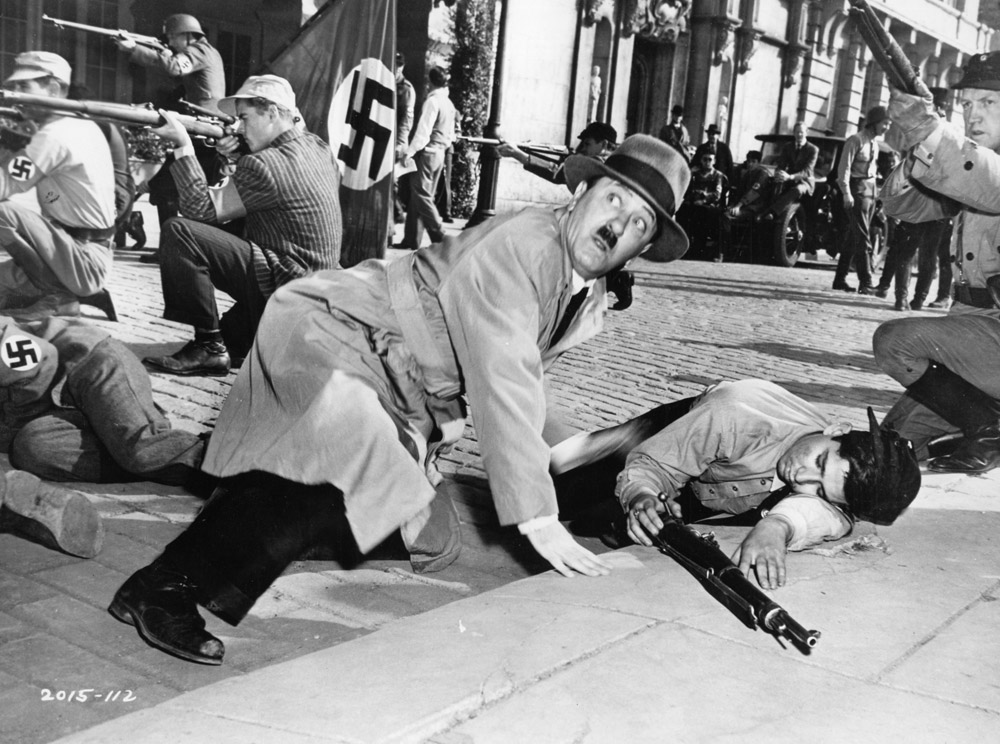 No human is less worthy of commemoration than Adolf Hitler (born 125 years ago, the same week as Chaplin, who made the most celebrated and profound portrait of the dictator). The films with Hitler as a character are another thing and certainly worth a close look, whether as historical documents or – from quite a different angle – as great impersonations.
Our selection covers some 20 years, starting from the first elementary statements, as in a remarkable find from 1933, Hitler’s Reign of Terror (where Cornelius Vanderbilt Jr. has adventures in Nazi Germany like Zelig, with results that are still impressive, born of authentic fear and desperation. And then throughout the war decade, there are many impressively plotted fantasies until Pabst’s gloomy 1955 film, Der letzte Akt, a worthy predecessor of the later vision of the bunker, Untergang.
After 1940, Chaplin’s overwhelming performance looms understandably as the high point that nobody else dared to approach. We enter the period of fantastic plots (James Hogan’s The Strange Death of Adolf Hitler, 1943, or Frank Tuttle’s The Magic Face, 1951). The former has the advantage and tension of communicating its insights and ideas at a time when Hitler was still a living threat. That time produces both wish-fulfillment stories (the kind initiated by Fritz Lang’s Man Hunt which starts with the protagonist bringing Hitler into focus in the sights of his hunting rifle) and great if usually absurd impersonations, like The Hitler Gang (John Farrow, 1944) where a good interpretation of Hitler is complemented by a bigger bunch of crooked faces, Germany’s gangster kingdom. Perhaps the best look-alikes, however, come from Russia. Our example is a delightful fantasy directed by Sergej Jutkevič, The New Adventures of Svejk, plus some short films that convey the creative energy of the Soviet combination of propaganda and art during the war era. Unfortunately, lack of space prevents us from showing Mihail Chiaureli’s mad epic, The Fall of Berlin, 1949, that gives us not only Hitler but – as the real protagonist of an amazing film – Stalin, in Michail Gelovani’s notorious interpretation.
As a motto I close my eyes and propose a joke from Lubitsch’s Cluny Brown: “Hitler – wasn’t he the fella who wrote that book, My Camp?”.