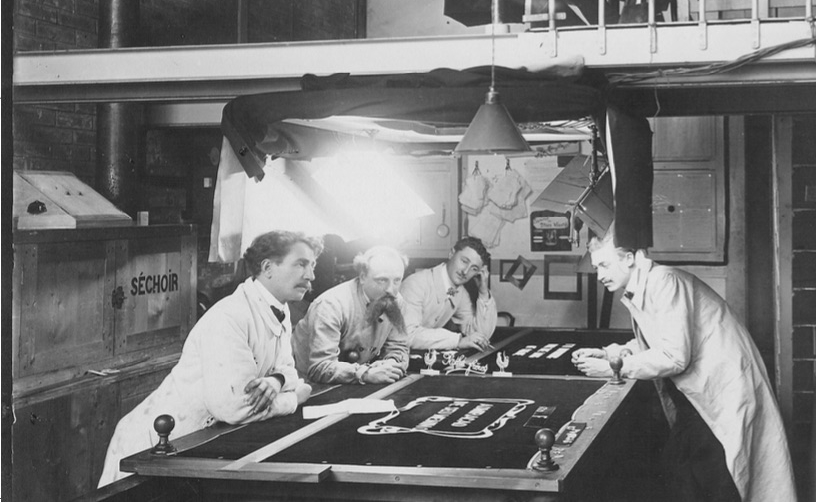 1907 was not notable in world history. Nothing much happened. An earthquake in distant Jamaica, a few diplomatic negotiations between France, Great Britain and Russia – it was a quiet year in the beautiful Belle Epoque.

But 1907 is of enormous significance in the history of the cinema. It is the year of a decisive change: film became a mass medium. And that is probably the most significant event of the year 1907 in world history.

The main factor in this development was the Pathé company, which systematically industrialised film production and created a rental market alongside the film sales market already in operation. Mass production and the rental market made it possible for the permanent cinemas to change their programme weekly and their number increased exponentially in 1907. And whereas audiences in 1904 or 1905 saw films which were one or two years old, in 1907 production and consumption were almost simultaneous. Geneviève de Brabant, for example, announced by Pathé in the Supplément of July 1907, was running in Bologna as early as the first week of July! A far bigger audience was reached via the now dual market, for both sales and rental. The first worldwide web, cinema allowed people in very different places around the globe to see exactly the same thing at the same time and to share the same virtual experiences. The fact that, with the Internet, we too have lived through the development of a technology into a mass medium gives us an immediate understanding of the situation of the new mass medium a hundred years ago.

Not constrained by any laws – the only regulations concerned safety, fire prevention and sometimes the volume of the music – the cinema was for a few years a genuine mass medium, accessible to all, a communal experience for all age groups. And it was this completely heterogeneous audience of children, women and men that was addressed by heterogeneous film programmes, made up from living pictures of the most varied genres.

We know the range of Pathé’s twelve production categories (other companies used slightly different names): 1. scènes de plein air, 2. scènes comiques, 3. scènes à trucs et à transformations, 4. scènes de sports – acrobaties, 5. scènes historiques, politiques, militaires, d’actualités, 6. scènes grivoises, 7. scènes de danses et ballets, 8. scènes dramatiques et réalistes, 9. scènes de féeries et de contes, 10. scènes religieuses et bibliques, 11. scènes ciné-phonographiques, 12. scènes d’arts et d’industries. We know the cinema programmes were made up of fifteen or more pictures switching from genre to genre, and such constant change is in itself an element of attraction and entertainment, but I do believe we need to extrapolate from the variety of films in the programmes and the range of production categories to conjure up the different groups among the mixed audiences which watched these films in the cinema tent or hall. We have not yet drawn a clear line from each film to its target audience. If we mentally establish these connections film by film, we can suddenly perceive with great clarity the historical cinema experience, the interplay between the screen and the audience. Films succeed each other in the programme, and they will appeal to, or bore, first one group then another and some will appeal to all – and each individual’s interest will fluctuate through the course of the show (just as in a newspaper some will attentively read about domestic politics but not the economy, the fashion coverage will address specific groups while all will dip into the “news in brief”). The motifs, contents and attractions of the early cinema in their kaleidoscopic abundance seem to us more functional and somehow stronger in their expression if we imagine them directed at their most interested group of viewers. And the shortness of the films allowed rapid change, so that a programme could offer enough interesting material for all the audience groups. (This could explain why the maximum length of films remained stable for several years at 300-400 metres.)

While the cinema later became a sphere which was only accessible to adults (like sexuality), and thereby became one of those experiences which divided children from adults, in 1907 it was the very opposite: there was one communal sphere for both big and small, and children’s films had a strong presence in the mix. This varied mix surely caused extra confusion to later assessments of this already confusingly strange pre-1910 cinema.

The “A Hundred Years Ago” section this year consists of nine programmes in two groups. The first five programmes are systematic and historical: Bologna 1907, Pathé 1907, two national cinematographies (Italy 1907 and Great Britain 1907) and the Joye Collection, the biggest historical collection of the years 1905-1913. The second half consists of four programmes built around some clusters and themes which emerged from viewing about 200 films.

This section is taking place for the fifth time and the changes since 1903 – many more films and much longer films – became obvious in selecting the programmes for the festival: the material just would no longer fit into the allotted time of an hour a day. (Pro memoria: Pathé used 45,000 metres of negative stock in 1907 as compared to 23,000 metres in 1906, and the average length of its films was 129 metres in 1907 as compared to 67 metres in 1905, as we know thanks to Henri Bousquet and Laurent Le Forestier.) The Festival kindly did give this section some extra time, but I still had to leave a lot out, such as a programme entitled “Dashes and Dots” (longish, black and white chase films, the “dashes”, alternating with short scènes à trucs in colour, the “dots”) and a programme entitled “Déjà vu” (consisting of a short programme of five films, which would then have been run a second time with five different but extremely similar films).

108 short films make more trouble and work than 108 feature films, and I would like to express my heart-felt thanks to all the archives, institutions and individuals involved for their help in this complex undertaking. Special thanks are due to Roland Cosandey, Bryony Dixon, Giovanni Lasi, Stéphanie Salmon, Luigi Virgolin and the Fondation Jérôme Seydoux-Pathé, who have all generously contributed their precious time, knowledge and documents. All Gaumont and Pathé titles are being shown with the kind permission of Gaumont Pathé Archives.

Back once more to our peaceful 1907. There seem to have been some “Évènements au Maroc” (the last title in our programme). What sort of évènements? In March of that year a doctor in Marrakech suspected of being a French spy was killed, whereupon France and Spain sent troops, who killed about a thousand Moroccans, and divided up the land between them as they had been planning to do since 1904. France “pacified” the country and in 1912 set up a “protectorate”. Not until 1956 did Morocco regain its independence.