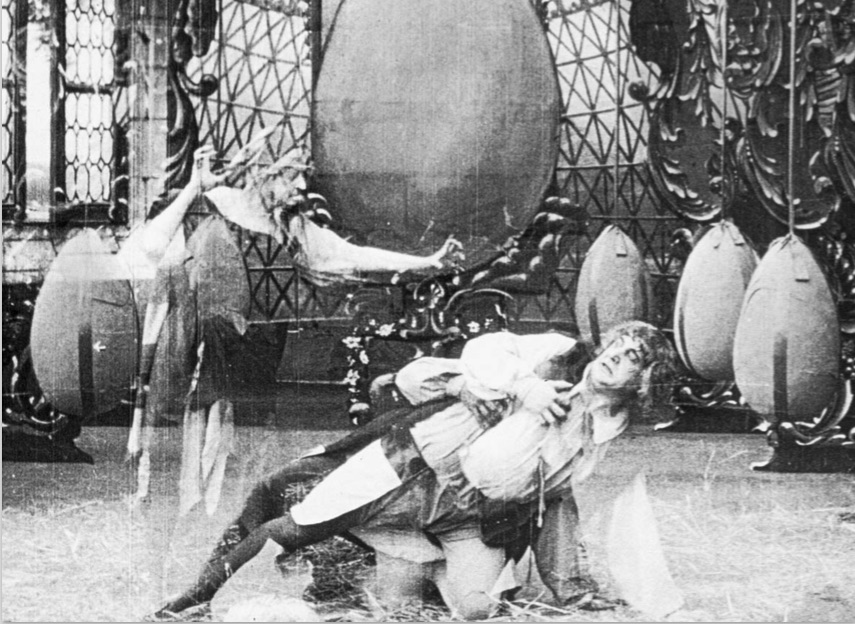 One Thursday morning ten years ago – 28 July 1995, to be precise – on the screen of the small cinema of the Nederlands Filmmuseum, Sleeping Beauty fell asleep. Cut; intertitle (in German): “One hundred years later. Departure for the hunt.” We sat there thunderstruck. Fait accompli; resistance impossible. Psalm 90 says that a thousand years are as one day in the sight of God. But there, in that cinema, a hundred years were a splice in a Pathé film of 1908.

Now, ten years later, the frontier of 1895 is still quite perceptible for us: the end of the era without cinema, and the beginning of the era that could be filmed. (This watershed will turn into an abstract historical fact when nobody remembers people who lived prior to 1895.)

Now, from 1995 onwards, for every year there are films of 100 years ago. Sleeping Beauty does not need a time machine to arrive in the future; she gets there in her sleep, as all of us do on a minor scale every night. Imagine that someone has fallen asleep in 1905 while watching a film, just at the start of a splice, and wakes up 100 years later, here in Bologna at the Cinema Ritrovato, in the same film but on the other side of the splice, and sees the film until the end.

What are ten years? From 1895 to 1905, and again from 1905 to 1915, cinema changed enormously. What, and how much, chan- ged in a single year, from 1904 to 1905? Starting to work on 1905 I asked myself whether the structure of the program could or should stay the same as last year, or whether it had to be completely different. The “pictures” of 1904 were in direct contact with other forms of entertainment: variety, opera, parades, series of slides, and the actualities of the Panopticum. This relationship still exists in 1905, but in a recessive form, as one among many aspects. On the whole the production has a different texture; it gives the feeling of a consolidated cinematographic identity, and uses its means and effects expertly.

The longest scènes de plein air now offer in 200 metres a rich and varied program: the newsreel format is ready for future use. In the scènes dramatiques or comiques (which Méliès, in his text on the four genres of vues cinématographiques of 1906-1907, counted among the vues composées or de genre), a number of formal procedures are perfected and standardized through their systematic application. The short “physiognomical” films transform the close-up into a routine. All sorts of protagonists pursue each other across the screen, in countless variations of the chase film that encompass all registers, from the cheerful and funny to the threatening and fatal. And our attentive eye follows the trajectories of people, vehicles, suitcases, or dogs from shot to shot, bestowing continuity upon them. The calculated game of anticipation creates suspense and empathy. In France the longest and most expensive films were produced in the féerie genre, the fairytale film.

The production is anonymous, serial, and without stars, authors, or single masterpieces. No film of that period contains all its meaning, since that is found in part outside the film, in the position it occupied within the complete program of a cinematographic show. Every film of those years is a priori conceived and produced as a fraction of a program of around 12 or 15 scènes. The lengths (from 20 to 280 metres) and the genres are correlated to their position in the sequence of the program. Therefore, instead of “film” we should use historical terms like “scene” or “picture”, which imply the notion of being a component. A cinematographic “picture” has a specific tonality (comparable to the affects of Baroque opera); it is not complex. The complexity of the cinematography of 1905 is only revealed via a complete program. I believe that this intrinsic incompleteness of the single “picture” (and the confusion with a “film”) is the main reason for the misunderstanding and neglect of this material, even though the period from 1895 to 1915 is undoubtedly the most dynamic and varied in the history of cinema.

If last year the main problem was finding sufficient material from 1904, this year the problem was finding decent copies. The survival ratio of the production of 1905 is quite good, considering the number of titles still in existence, but the general level of conservation is appalling. It is time to launch a restoration campaign for the films of cinema’s first decades. It would probably benefit such a project to think not only in terms of genres but also in terms of tonalities and their positions in a program of the period. A single film should be considered and restored bearing in mind the overall complexity of a complete program, from the initial scène de plein air to the final comic scene.

The title of our section is “The Films of 1905”. It comes close to being “The Pathé Production of 1905”. To compensate for the strong preponderance of Pathé films, we have dedicated two programs to other production companies: Parnaland, presented on Friday 8 July by Camille Blot-Wellens, and Alberini e Santoni, presented on Sunday 3 July by the AIRSC, following a period program with La presa di Roma. To conclude the section, on Saturday 9 July Roland Cosandey will present a monographic program on scènes d’actualités (the Urban Catalogue of 1905 uses correspondingly the descriptive terms “actual pictures”, “historic pictures”, or “war pictures”).

I would like to thank all those who have made the 1905 section possible. With over 100 films, it is its own film festival.