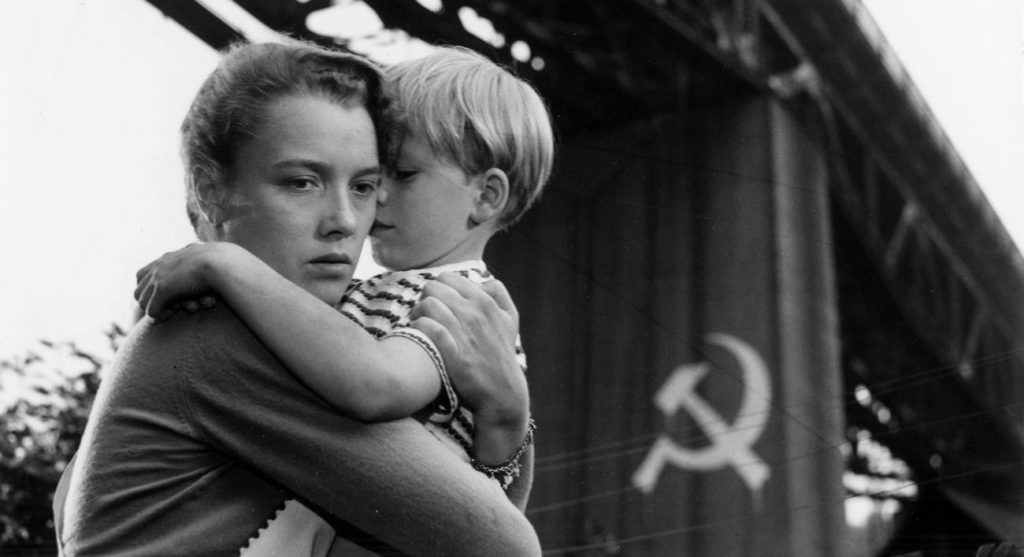 Helmut Käutner (1908-1980) remains the lone writer-director of Adenauer-era cinema whose work is remembered in the rest of the world fondly by a wide variety of cinephiles (pace Wolfgang Staudte). And yet: the Käutner beloved so much is but a shadow of the true genius he was. Sad to say that his most widely circulated works (e.g. Des Teufels General, 1955; Der Hauptmann von Köpenick, 1956) are among his formally more conventional and politically less partisan films. Especially those from the early ’50s as well as those from the period after his Hollywood sojourn (1958-59) remain little seen even at home. At decade’s dawn, Käutner created some of his more off-beat works: films like the dazzling noir political thriller Epilog – Das Geheimnis der Orplid (1950) or the emancipatory-minded melodrama Bildnis einer Unbekannten (1954) that are mood-wise irritating and style-wise unorthodox; at the decade’s dusk, he forged a way forward for a modernist FRG mainstream cinema with unheralded masterpieces like the meta-media hip musical comedy Das Glas Wasser (1960) or the serenely grim neorealist film gris Schwarzer Kies (1961) – too late.

This tribute focuses strongly on Käutner, the ironic modernist of melancholia, inventor of cinematic forms, avant-gardist of the popular – if only because the comedies are difficult to appreciate outside Germany. In fact, even at home one would need to explain part of the caustic, quasi-Tashlinesque genius at play in, among others, Kitty und die Weltkonferenz (1939), Der Apfel ist ab (1948), or Der Traum von Lieschen Müller (1961). Yet, one has to take note of this for Käutner’s background is in ’30s political cabaret where he also honed his skills at writing songs – a talent he put to good use in whatever genre he worked in. All of which is to say: Agfacolor harbor melodramas like Große Freiheit Nr. 7 (1944-45), exercises in dreamy river barge (poetic/neo) realism like Unter den Brücken (1946-50), subversive historical spectacles like Ludwig II. – Glanz und Ende eines Königs (1955), brooding political reveries with sinister endings like Himmel ohne Sterne (1955), and crime of all kinds like Epilog – Das Geheimnis der Orplid and Schwarzer Kies certainly travel more easily. But: don’t think you’ve got Käutner after these eight choice pieces – for he’s an escape artist who tried to reinvent cinema and himself each and every time he started a film. And even after one has seen everything he did for the big screen as well as the small one (his Tv œuvre is equally adventurous), the suspicion remains that you haven’t seen anything yet.