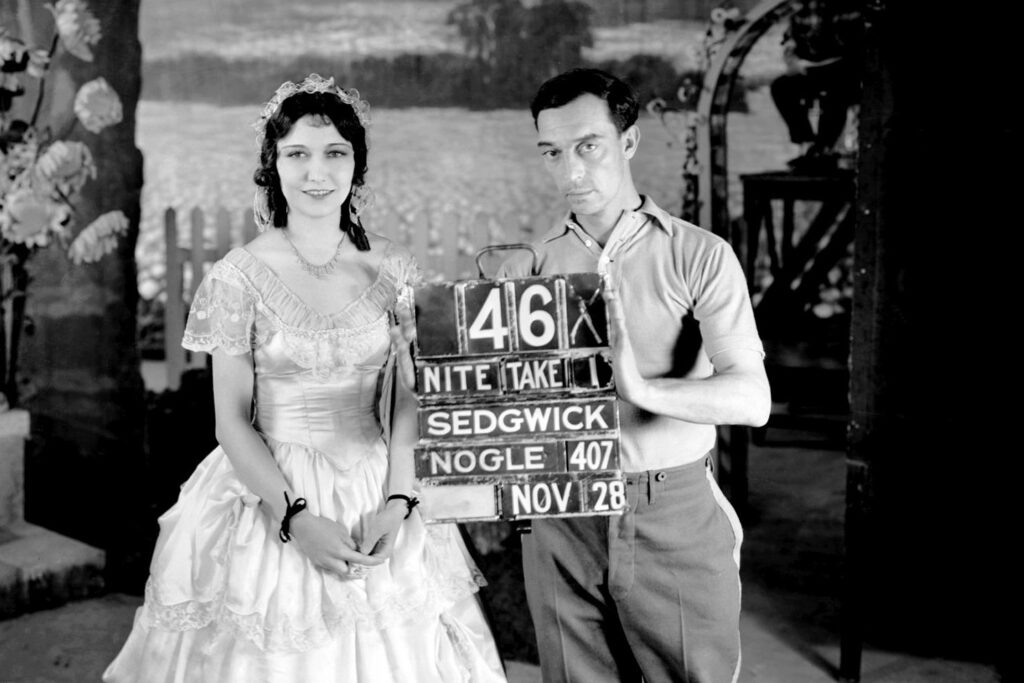 As the catalogue is about to go to press, we’re still not sure if we’ll be able to open this section with a previously unseen film: the only short co-created by Chaplin and Keaton. The working title is The Lockdowners. Fade into Charlie full of tics and washing his hands obsessively with whatever liquid is in arms’ reach. To cover his nose and mouth during the pandemic, he wears funnels, diving masks or extra-large bras. He finds any excuse to get out and takes frequent strolls with a hamster, a broom-head or a fringed lampshade on a leash. He starts hugging the walls and climbing streetlights as soon as he sees a passerby. The police constantly fine him, but he is penniless and ends up having to work in a nursing home where a gang of lively old-timers tries to escape every day. The pandemic swells the ranks of the unemployed, but death never appears in the movie since Chaplin made it while it was still happening, unaware that hundreds of thousands of people had passed away. Buster is a trainee nurse in the same care home. He wears an oversized mask that covers three-quarters of his body and dozens of rubber bands that stifle his movement and get caught on everything, but he carries on, stoic as ever. Buster suspects he has the virus, and goes into quarantine where he practises synchronised swimming and cross-country skiing in his living room. He bakes bread non-stop, but one time he uses too much yeast and the dough invades the house. Totally unaware of what’s going on outside, he designs a system of pulleys, contraptions and self-propelled machines so he can dine with the girl in the building across the street, with whom he is secretly in love. The other five sections will unveil four new restorations and take a broader perspective on Keaton’s golden age by including The Saphead (1920) and Spite Marriage (1929). These two films began and ended the 1920s, marking the rise and decline of Keaton’s career. A recent graduate of Fatty Arbuckle’s school, he was ‘loaned’ by Schenck to Metro Pictures, where he made his first feature film. In The Saphead we see the future Keaton come to life in front of our eyes, while in Spite Marriage we seem to watch him grow dim under the weight of a second troubled MGM production. Yet both films offer glimpses of his genius, which spills over to varying degrees into all the pictures in our retrospective. If you watch restored prints of The Playhouse, The Boat, The Blacksmith (in its two versions), The Balloonatic and The Love Nest one after another, they don’t appear to be minor films at all. Rather they are brilliant tiles in a mosaic that when assembled demonstrates what a gigantic artistic presence he was. We’ll continue negotiating with Buster and Charlie for The Lockdowners, but if we don’t get it, we’ll simply have to imagine it ourselves.

THE BALLOONATIC / THE BOAT

THE BALLOONATIC / THE BOAT

THE PLAYHOUSE / THE LOVE NEST

THE PLAYHOUSE / THE LOVE NEST

THE BLACKSMITH / THE TRIUMPH OF LESTER SNAPWELL

THE BLACKSMITH / THE TRIUMPH OF LESTER SNAPWELL

For The Blacksmith, drums accompaniment by Frank Bockius

THE BLACKSMITH - ALTERNATIVE SEQUENCE (4')
THE TRIUMPH OF LESTER SNAPWELL (8')

THE PLAYHOUSE / THE LOVE NEST / THE BALLOONATIC

THE PLAYHOUSE / THE LOVE NEST / THE BALLOONATIC