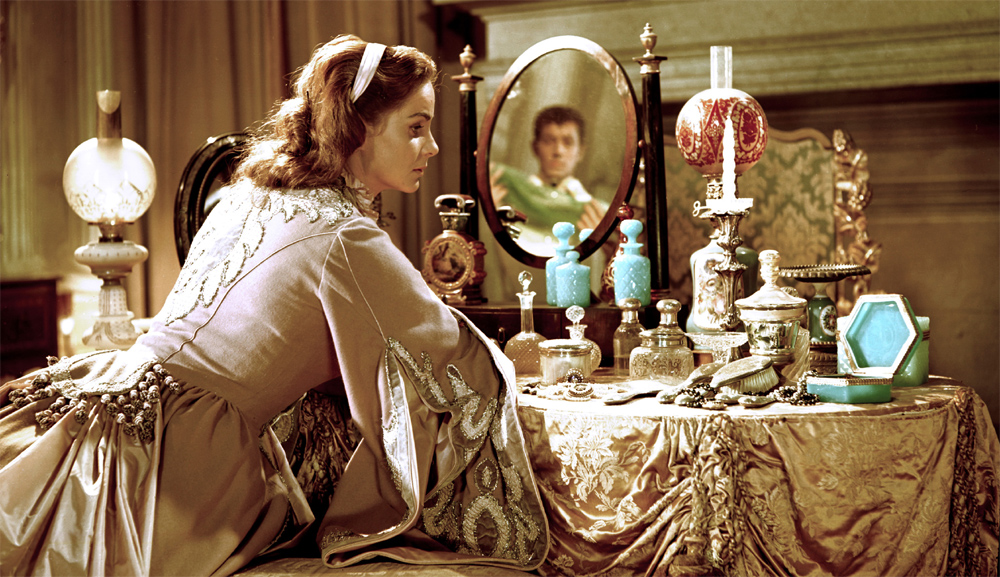 IN THE MOOD FOR COLOUR

These devastating years we are living through have at least brought one merit: they are restoring to us the brightness and great variety of the colour of one hundred years of cinema.

Cinema colour, the fantasy of those experimenters who, right at the dawn, imagined coloured films. Since this was still not possible to record, they invented the paintbrush, tinting, toning, and then the pochoir technique.

Colour was supposed to be useful in taking cinema closer to reality, but it is evident that the opposite occurred – it distanced it. A wonderful departure point for unfaithfulness, only time in a film is even falser than its colours!

Perhaps it is precisely this common principal of falsifying that acts as the foundations to the creation of an unwritten code of rules, generating a screen-viewer relationship that exists on a more intimate and more ‘secret’ level. In this relationship, screen size also plays an important role. The pumps of Red Shoes have a different impact depending on whether they are seen on a large screen or on television. Intimacy is also conveyed through dimension.

Colours – so fleeting and deceptive, far from reality, different from copy to copy, and from screening to screening. Yet they are an extraordinary compass for indicating what time we are in, when the film we are watching was shot. The colours of the 1910s, or the ’40s, ’70s or ’90s, immediately betray their era, more than the sets, performers or style formulas.

And what common denominator do such diverse works as Senso, Il Gattopardo, Jubal, Picnic, Johnny Guitar, African Queen share? That they were made within a very brief time bracket, between 1954 and 1963, during the golden age of cinema and colour experimentation. Apart from the silent years, the Technicolor era is the one that, in the collective memory, best identifies with a chromatic season. The yellow of Singing in the Rain is certainly one of the key colours of the ’50s, because film colours correspond, in our collective memory, to those of the society of those years. The films we present this year, in the sound section, all share other affinities: their makers use colour in a very demanding way, assisted by photography directors and costume designers with prime visibility. John Huston, Luchino Visconti, Delmer Daves and Nick Ray were all born within a seven-year period, between 1904 and 1911. Hence their tastes were shaped through a 19th century view of the world, with colours that were substantially different to the ones we are familiar with today – colours influenced by the relationship with painting. And what is Technicolor if not the most 19th century system of a 19th century art? In technological terms, it is rather similar to Pochoir, which uses the same type of colour – aniline dyes – to print the chromatism on black and white copies.

The wild Trucolor of Johnny Guitar, the wonderful European Technicolor of Senso, the extremely elaborate Eastman of Il Gattopardo, and the tints of the American Technicolor of Picnic… Are these not the souls to the films, stirring the deepest subconscious reactions that have us remember them because they touch the most intimate areas in our sensory perception? At the end of 2008 Martin Scorsese entrusted us with the demanding task of restoring Senso – a project concluded recently, with the printing of the copy to be screened at this year’s festival. For eighteen months, Scorsese retrieved a certain number of memories, which for him were fundamental and indelible, such as the red of the flowers strewn on the stalls from the stage, at the start of the film, and the gold and the whiteness of the Habsburg jackets. Very clear memories, corresponding with the period material that came to us and guided our restoration.

What do we remember of a film? The plot, of course, the actors and actresses, some lines, a situation, a style… But in the memory game that has us attached to certain freeze-frames for decades, what part do colours play? Is not the chromatic mood of a film perhaps the most secret and intimate aspect of our relationship with the films we have loved?

The incredible colours of the actors’ shirts in Johnny Guitar, Katharine Hepburn’s white dress, which loses its brilliance, during African Queen, the soldiers’ military uniforms in 317eme , which Indochina’s mugginess immediately turns grey (because even a black and white film can have its connection with colour), the pure white caps in Cuffie della Frisia, from 1910, the gilded rooms of the final party in Il Gattopardo, William Holden’s tan in Picnic, the skies and the countryside in Jubal… but we could also go on, with the retrospective on Stanley Donen, that master of colour, with the sky and the dazzle of the skyscrapers in his New York. Are these not the materialization of our deepest memories of all these films?