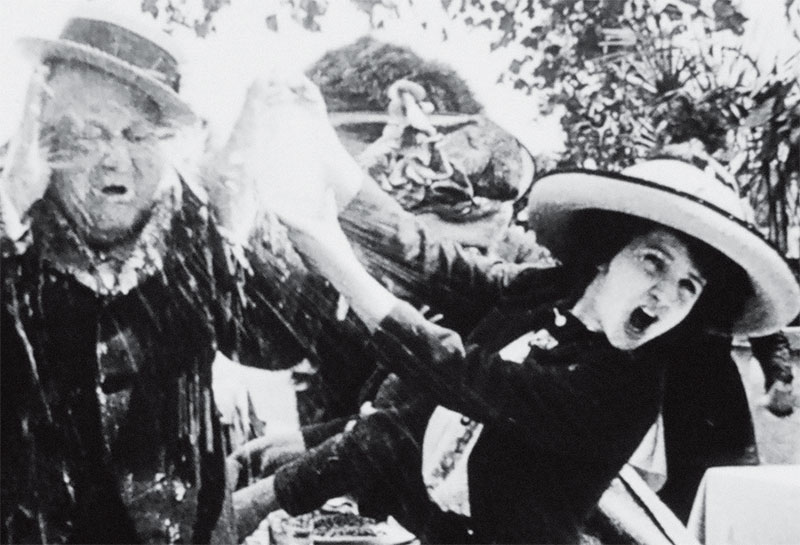 Feeling that early cinema was not explored sufficiently, Il Cinema Ritrovato started, in 2003, the Hundred Years Ago series. But we cannot claim, by any stretch of imagination, that the films of 1912 belong to early cinema, or that they have not yet been sufficiently explored. Since 1982 the festivals of Bologna and Pordenone have offered 550 opportunities to see that year’s films. I therefore decided to prioritise unfamiliar works.

The first archive I visited was the Národní filmový archiv in Prague, and it was a remark by its director Vladimír Ope˘la, to the effect that programming should always be political, that strengthened my resolve to use the films of the past to reflect the present. So the three Dark Materials programmes came into being. The other programmes bring us some particularly beautiful films, as well as subjects especially popular that year and also technical innovations. As usual, the festival week was not sufficient to accommodate all my favourites ideas (programmes that did not happen are Anybody Here for Love?, Lions in the Drawing Room and Western), although I did manage to smuggle Eclair 1912 and Gaumont 1912 into the Silent Colour section. This year it is again Giovanni Lasi who has contributed his specialised knowledge in curating the Italian programmes. In 1912 a great deal was being written about films and the cinema. Writers started to visit the cinema regularly; they experienced “the world in cinema” and cried bitter tears when “the French boat-hauler pulls his dead bride upstream, slowly and laboriously, through the countryside in full bloom” (Peter Altenberg: the film is obviously Léonce Perret’s Le Haleur).

One of the most significant of the 1912 cinema texts is Viktor Klemperer’s Das Lichtspiel. Klemperer recognised the cinema as “the most democratic and most international of institutions”. Of its internationalism: “Films do not go on tour abroad – for they are everywhere at home”. Of its democracy: “It is democratic through and through, offering as much to ordinary people as to the more educated”. He noted that the programmes in both elegant and working-class cinemas were identical and that “the ‘ordinary people’ treat serious material with great reverence, and the ‘educated’ evince noisy appreciation of slapstick pranks”. He also felt the cinema provided “space for the viewer’s creative imagination” and all, educated and uneducated, were “both compelled and enabled to give a soul to those moving bodies – or, to put it more simply, to write their own text for the pictures”.

Relative to the theatre, he saw its surrogate, the cinema, as superior in its central element, drama, “using unmediated action to jar us, to lead the self out from the confines of its everyday feelings into the freedom to participate in other people’s destinies” (Viktor Klemperer, Das Lichtspiel, in Velhagen & Klasing Monatshefte, April 1912, now in Fritz Güttinger, Kein Tag ohne Kino, 1984).