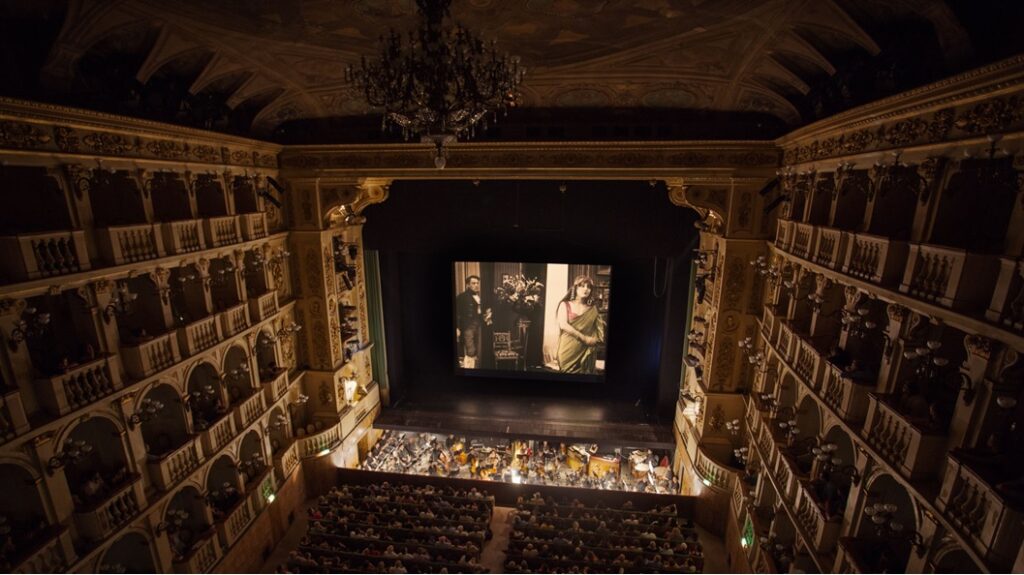 as we have previously announced, we are thrilled to confirm that the 34th edition of Il Cinema Ritrovato will actually take place from August 25 to 31, 2020 (you can purchase the Festival Passes here).
The festival is shaping up to offer you, this year too, a unique viewing experience.

On the eve of our opening, originally scheduled for June 20, we would like to provide you with some news and updates. One of the most exciting among them is the generous collaboration with the Teatro Comunale di Bologna which will allow Il Cinema Ritrovato to have daily screenings of the entire silent strand inside the Opera House, one of the most beautiful and evocative spaces in Bologna.

Needless to say, we are working in full compliance of safety regulations both for accessing and attending screening: a booking system will be implemented to avoid queuing and social distancing rules will be applied both in theatres and open air screenings. All these protocols will be tested as we approach August to make sure that Il Cinema Ritrovato will be, this year more than ever, a moment of joy and pleasure for all involved.

Festival passes will be available starting from June 29, along with detailed information regarding access. For your travel and accommodation arrangements, please visit the ‘Bologna Welcome’ website.

In order to safeguard the beauty of our festival as you have always known it, and to make it more inclusive for our local audience, we have imagined an ‘extended festival’, with a total of three open air screens: BarcArena – surrounded by trees and green in the Barca neighbourhood – the Arena Puccini – a landmark for open air film screenings – and, of course, Piazza Maggiore.
Piazza Maggiore will host two cine-concerts this year: on August 26, Buster Keaton’s genius will lit up once again with The General (1926), restored in the framework of Cineteca and Cohen Films’ Keaton project; on August 29, Lupu Pick’s Sylvester will be screened accompanied by the original score composed for the film’s premiere in 1924 by Klaus Pringsheim (Thomas Mann’s brother in law) and rediscovered by the Deutsche Kinemathek during a complex and time-consuming restoration project. Both concerts will be accompanied live by the Teatro Comunale orchestra.

These are only two of many screenings we wanted to share with you as we are reshaping Il Cinema Ritrovato. Although times are different, our energy and commitment to search and discover beauty in all cinema from the past has been untouched and we are very much looking forward to board our Time and Space Machines and to open the gates to the Cinephiles’ Heaven!

Stay tuned for the festival line-up on July 29!