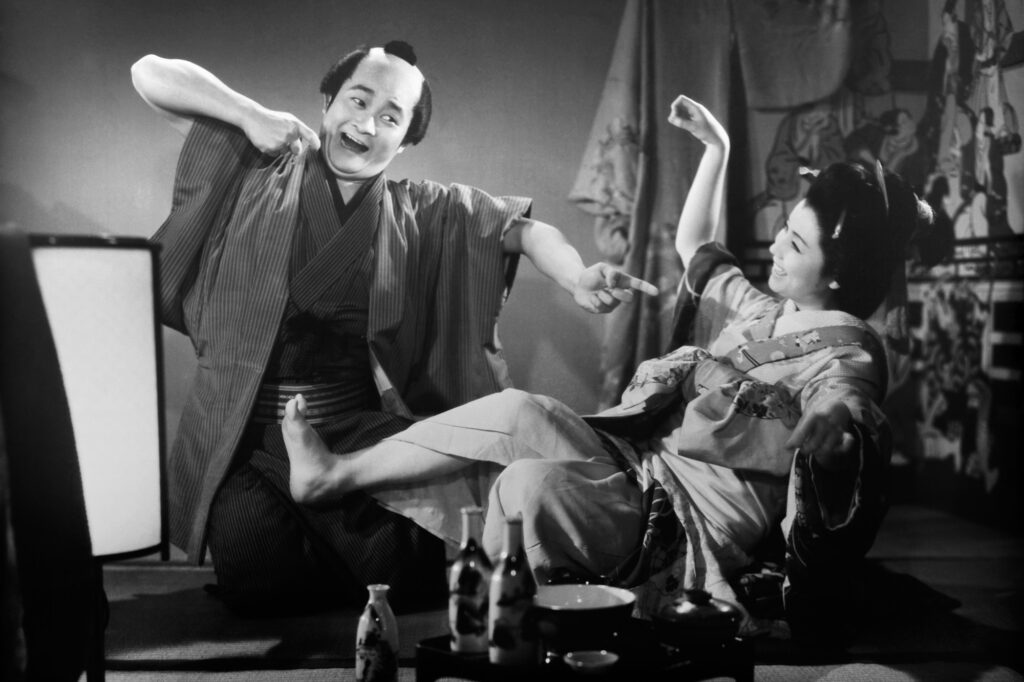 Yuzo Kawashima (1918-1963) is the ‘missing link’ between the classical Japanese cinema and the New Wave. An apprentice at Shochiku of such studio stalwarts as Keisuke Kinoshita and Minoru Shibuya and a teacher of Shohei Imamura, he made films combining the care and precision of the studio era with the flamboyance and daring of the 1960s. For Imamura, Kawashima “personified the Japanese New Wave ten years before its emergence”, a tribute that testifies to Kawashima’s lasting impact despite his premature death. Chronic poor health inspired a pessimistic worldview and a sense of the absurd. In his oeuvre, subtle, poignant realist dramas jostle with freewheeling, unpredictable comedies poised between satire and farce. An expert stylist, Kawashima delighted in elaborate compositions, favouring group shots over close-ups, and placing his actors strategically amidst props and furnishings. He allowed his stars free rein on set, encouraging breezy, noisy, vital performances that made full play with facial expression, tone of voice, posture, gesture and movement. Critic Koshi Ueno has described the importance in his films of “the structure of space and the interaction between space and people”, and recalls “images of people moving from one place to another, like shadows”. Perhaps that stress on space and motion testifies to Kawashima’s experience: a country boy who became a perceptive chronicler of urban life; a “wandering director” who moved from studio to studio, making films at Shochiku, Nikkatsu, Toho and its subsidiaries, and Daiei. Shohei Imamura, who was Kawashima’s apprentice during his Nikkatsu period, off ered some vivid character sketches of “the kind of man who sleeps through the day and becomes active at night”, a man who drank heavily and channelled his fear of death into humour. Imamura wrote that he “was completely different from the so-called great directors who always strive for perfection. He had an extremely distorted way of looking at the world. He abhorred and mocked exaggeration at all times. He was always rebelling against authority and striving to eliminate hypocrisy”. The vital, earthy tone of Imamura’s own films as director owes much to Kawashima. In Kashima ari (Room to Let, 1959), one of Kawashima’s characters declares, “Jinsei wa sayonara dake da”, or “Life is nothing but goodbye”. Those words, engraved later on his gravestone and borrowed by Imamura for his written reminiscence on the director, seemed to anticipate his early death and exemplify the melancholy that underlies his humour. Yet even though his life and career were sadly curtailed, Kawashima directed a total of 51 films, scripting or co-scripting a third of them. This retrospective will screen a selection of his fi nest work, focusing on his first maturity during his final years at Shochiku and his Nikkatsu period.

KINOU TO ASU NO AIDA

KINOU TO ASU NO AIDA