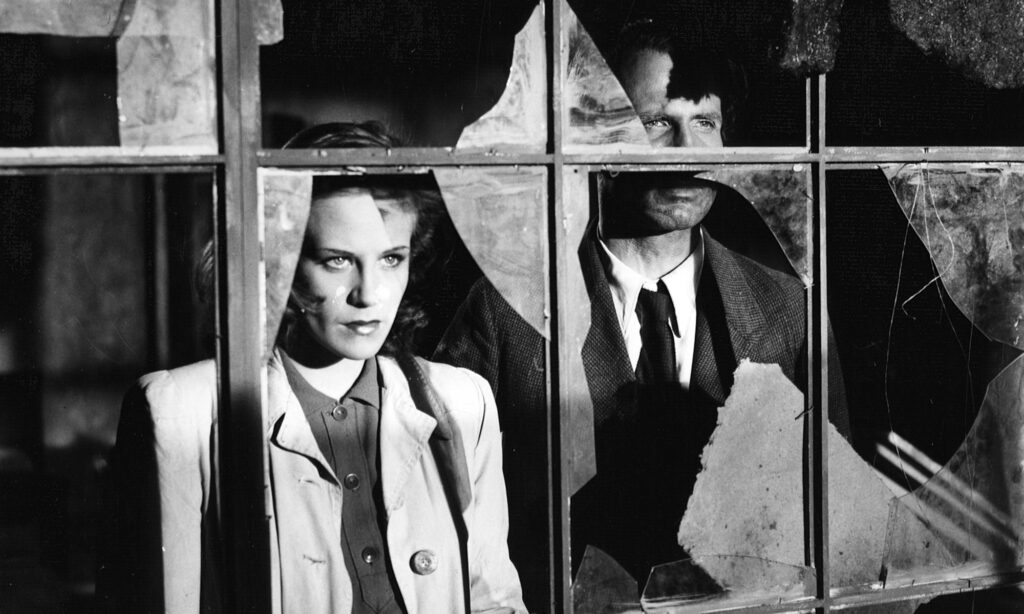 Wolfgang Staudte (1906-1984) is arguably the most widely venerated director of German postwar cinema (besides Helmut Käutner), albeit less for his art than for his political outspokenness – a man of the left shackled to no orthodoxies. Like no other prominent figure of the early Bonn Republic film industry, Staudte attacked the conservative establishment’s black-and-white lies, addressed issues on which others remained silent, and shed light on dark stories of the present as well as the recent past. He did this, in the same way, more or less, as he had done between 1945 and 1956 for DEFA, the main production company of what in 1949 became the German Democratic Republic. There was one key difference between these periods. With Die Mörder sind unter uns (1946), Rotation (1948) and Der Untertan (1951), he was in synch with the communist mainstream, making him the (soon to be founded) nation’s poster boy for the seventh art, while with Rosen für den Staatsanwalt (Roses for the Prosecutor, 1959), Kirmes (1960) and Herrenpartie / Muški izlet (1964), he found himself called Nestbeschmutzer by the other Germany’s rightwing mainstream, its reactionary loudmouths. Staudte was very serious about his politics and certainly wanted to be remembered as a rebel whose world-weary, laconic version of “Fiat iustitia et pereat mundus” (Let justice be done, though the world perish) would be “Cowardice turns every form of government into a dictatorship” (as the commemorative plaque at his birthplace in Saarbrücken has it).
But none of this says anything about Staudte the filmmaker, a director of extraordinary versatility whose finest achievements can be found in works often just superficially discussed, such as the proto-feminist drama Rose Bernd (1957), or the allegorical coming-of-age tale Das Lamm (1964). It also says little about his strengths, which were action, adventure and melodrama, and neither about his weaknesses, which are mainly found in his attempts at political satire. Despite their importance, Der Untertan and Rosen für den Staatsanwalt are loud pasquinades, whose hectoring humour betrays Staudte’s elegance and wit as seen in less well-known films on similar subjects, such as  or Der letzte Zeuge (1960) or Der Snob (1983). It also says little the delight Staudte took in making films – in applying his craft, shaping pertinent ideas with even the humblest materials – which he rarely talked about himself. Staudte may be an even greater filmmaker than he’s commonly given credit for. One just needs to understand what it means to be a citizen-artist, a man for whom being in dialogue with the masses was a duty, a privilege and an honour.