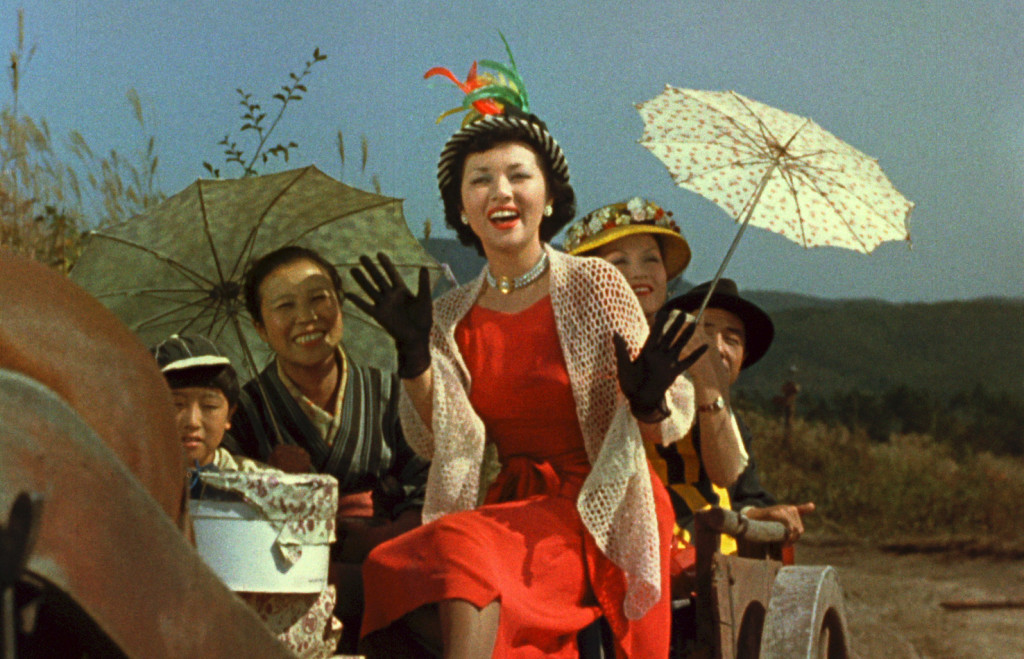 This concluding installment in a two-year programme of Japanese colour cinema at Il Cinema Ritrovato offers a broad variety of early Japanese colour films, stretching in time from pioneering pre-war experimentation to the colour masterpieces of the late 1950s, and comprising a mixture of classics by certified auteurs with commercial entertainment films, in both period and contemporary settings. In so doing, we highlight the diverse artistic uses to which colour technology in Japan was put.
Although widespread use of colour in commercial film only began in the postwar years, experiments with colour process had been undertaken in the 1930s. The earliest film in this retrospective, shown here in a new restoration of the surviving footage, is Sennibari (The Thousand-Stitch Belt), a 1937 film made using a pioneering two-strip colour process.
The rest of the programme explores various manifestations of colour cinema in the 1950s, spanning the seven years from the first commercial full-length feature film in colour, Keisuke Kinoshita’s Karumen kokyo ni kaeru (Carmen Comes Home, 1951) to the same director’s flamboyant historical fable, Narayama bushiko (The Ballad of Narayama, 1958), with its colour schemes inspired by traditional theatre and arts.
The films screened will illustrate various colour processes, including imported Eastmancolor and the indigenous Fujicolor and Konicolor formats. This year we have a particular focus on Konicolor, featured in three of the films included in the programme. Devised by the Konishiroku Shashin Kogyo laboratory, this became celebrated for its three-strip process, which was able vividly to reproduce a broad range of colours and shades.
The programme also highlights the varied artistic uses made of colour film in Japan. From the sheer brightness and vitality of Jazz musume tanjo (A Jazz Girl is Born, 1955) to the political colour symbolism of Yoshimura’s Yoru no kawa (Night River, 1956) to the psychological colour symbolism of Gosho’s Kiiroi karasu (The Yellow Crow, 1957), the chosen films exemplify different facets of the artistic potential of the emerging medium as it was embraced by the Japanese film industry.
This program was organised in collaboration with the National Film Center, Tokyo, and we acknowledge especially the participation of the assistant curator Masaki Daibo.