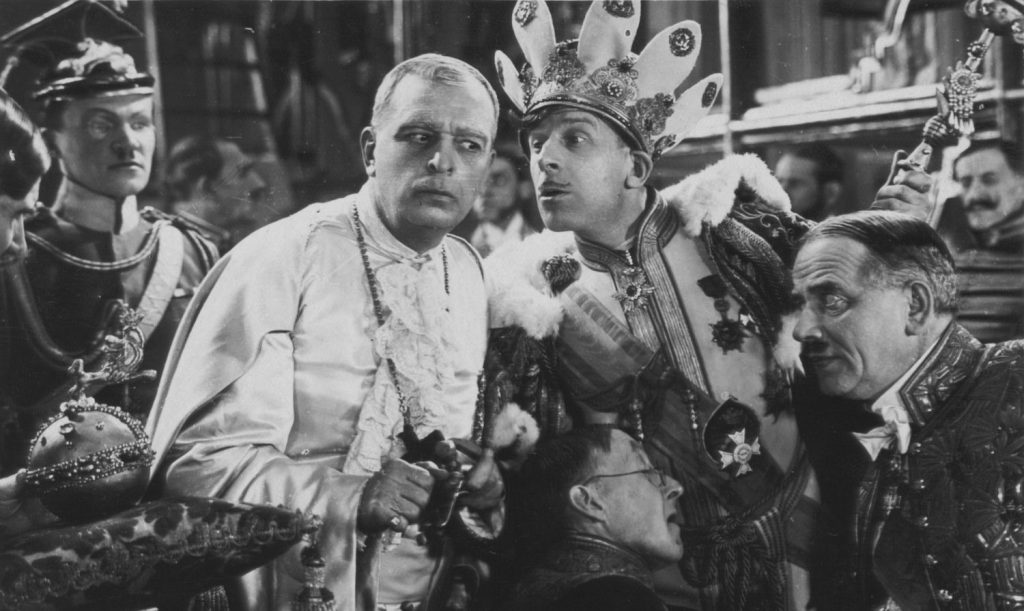 Sound came to Soviet cinema later than to other major cinematic industries. Although a few experimental shorts were made in 1929, the first fiction film was released only in the summer of 1931. For many years sound was still considered a luxury: the last silent film was released as late as 1936, and silent versions of sound films were made all the way to 1947.
Along with the technical issues, there were ideological ones. By early 1931 the Agitprop Division of the Central Committee of the Communist Party basically halted the import of foreign film. The domestic production of 1929-1931 was severely criticized either for formalism, or naturalism, or ‘cheap amusement’. Which resulted in a deep crisis – not only artistic but economic as well: the theaters were empty. The latter was a serious argument, and in April 1932 the government decided to loosen the reins. Cinema was a slow industry, so the results became visible only in 1934.
1934 was also the first year of relative political freedom in the USSR and, consequently, a year of perfect harmony in the Soviet film history. Filmmakers seemed to have finally obtained a balance between high artistic standards, the box office and the authorities. Ėjzenštejn, Kulešov, Kozincev and Trauberg were miraculously transformed from dangerous formalists into classics and did not have to overscore the achievements of montage cinema anymore. ‘Entertainment’ stopped being a curse word, and the audience returned to cinemas. Stalin was now watching films practically every night for three or four hours – making comments that were immediately delivered to the filmmakers. Things would become more complicated later, but as of 1934 ‘the Kremlin censor’ was content.
Filmmakers from veteran Jakov Protazanov to the relatively unknown Mark Donskoj got a second wind – experimenting with sound effects and music (among those who wrote for cinema in 1934 were Prokof ’ev and Šostakovič), exploring new genres, such as political satire and stylized historical comedy, and setting new standards in camerawork. Even silent cinema gained a new life, enriched by the acting and editing techniques of the sound film.
The potential choices for such a retrospective were so broad that we had to sacrifice some films. Fridrich Ėrmler’s Krest’jane (The Peasants), Michail Romm’s Pyška (Boule de suif), Aleksandr Medvekin’s Sčast’e (Happiness), Ėrvin Piscator’s Vosstanie rybakov (Revolt of the Fishermen) and many more are left out of the picture this time.
Decades later Grigorij Kozincev, who directed one of his best pictures in 1934, would call this period the ‘Second Utopia’ (the first one being the post-revolutionary decade). This time the hopes were short-lived: starting in 1935 more and more films were banned every year. And people were banned too: The Great Terror started in 1936.