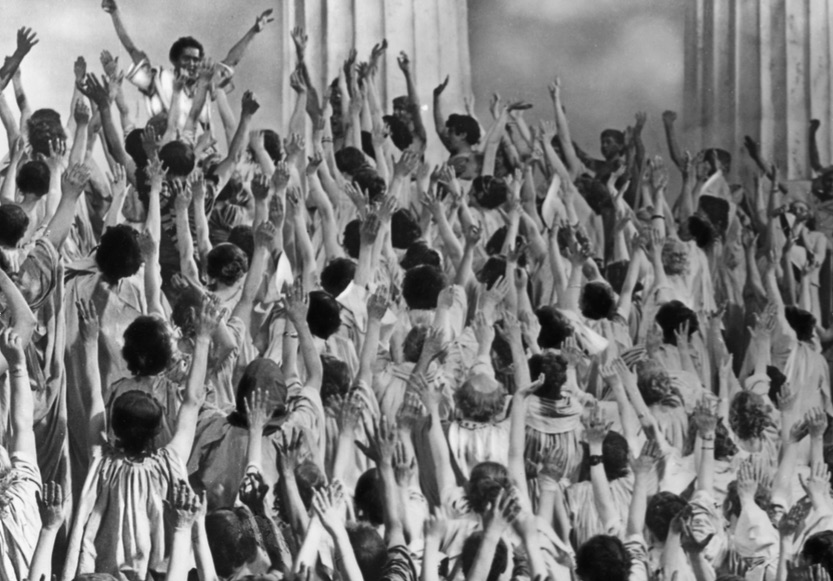 In the early sound years the German musical tradition was second only in importance to that of Hollywood. Its golden age falls between the period when the lively, dynamic and poetic films of Lubitsch reigned supreme amongst otherwise pedestrian and mechanical recordings of musical shows, and Busby Berkeley’s finest years which began in 1933. In that exact moment Germany was undergoing a fatal transition and even if several extremely interesting films came out in later years (Schünzel’s Viktor und Viktoria and Amphitryon and in particular Paul Martin’s Glückskinder, the most American-influenced German musical), it had passed its zenith and the genre as a whole faced a less rosy future than in the years leading up to 1933.

That short, beautifully creative period, was driven by directors such as Charell, Martin, Berger, von Bolvary and included the participation of versatile masters like Joe May, not to mention Max Ophuls with his Die verkaufte Braut. The films are filled with song, music and a palpable sense of joy. The camera is perpetually in motion creating a charming and natural unity between exterior and interior scenes, both of which are characterized by the same quality of light and delicate touch.

The musical numbers of these films are a lively spectacle in themselves, not just recorded performances, featuring a combination of elements that anticipate Donen and Kelly’s On the Town. The camera seems to be everywhere and this ubiquity again reflects a triumphant faith in mankind, a faith soon to be so profoundly shattered by real life events. The influence of great traditions – the emotion of operetta and the irony typical of cabaret and revue – are present under the surface, regardless of the subject matter and milieu depicted. The German musical constitutes a chain of events that deeply influenced the fortunes of European cinemas – not least because films like Der Kongress tanzt came out in three versions. With composers like Friedrich Hollaender, Werner R. Heymann, Franz Wachsmann (the future Franz Waxman), Mischa Spoliansky, Walter Jurmann, Franz Doelle and stars like Willy Fritsch, Lilian Harvey, Heinz Rühmann, Paul Hörbiger, Käthe von Nagy, Hans Albers, Dolly Haas and Comedian Harmonists, it all seems so very touching and eternal.