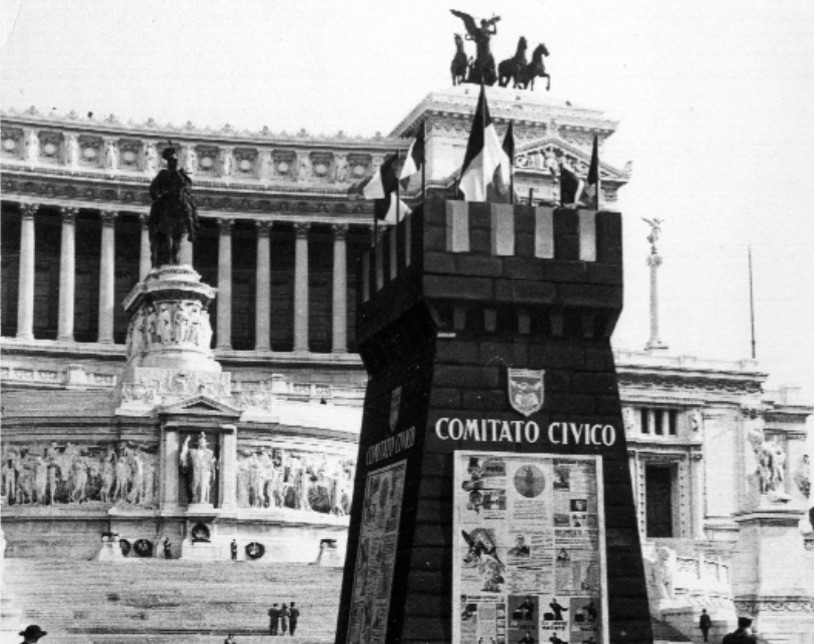 The Comitati Civici (“civic committees”) were founded on February 8, 1948 by Luigi Gedda, vice president of the Azione Cattolica – a decision made by Pope Pius XII, in light of the delicate political elections on April 18, 1948. In two weeks time an entire structure was set up, ranging from the central headquarters of the Comitato Civico Nazionale down to province and local offices, which corresponded to dioceses and parishes. The Psychological Office was in charge of propaganda, and created both an anti-abstention and anti-communism campaign through the press, posters and leaflets, and cinema.

Adapted extracts from an interview by Tatti Sanguineti

“We were supporters of Méliès”

Our job in the Psychological Office was divided into two areas: fighting vote abstention and fighting communism. We never fought for anyone; ours was a “con” propaganda, not a “pro” one. While the Democrazia Cristiana may have been better off for our work, and I can’t deny that this may have been a part of our intention, we had no precise ties to them.

The creative mastermind behind the Comitati Civici was composed of Alberto Perrini – a writer of comedies who was well received abroad as well as in Italy– and Marcello Vazio – who later became quite a businessman. They were supported by renowned names, for example Giancarlo Vigorelli, a Comitato Civico regular, along with Diego Fabbri. This little group racked its brains for striking persuasive methods that would capture the imagination. We were all followers of Méliès and certainly not of Lumière. Our posters were all based on the imaginary. We developed a vicious campaign against communism and I was accused of being a deep-rooted anti-communist. This wasn’t true. I received dispatches from the Chiese del Silenzio, which documented everything that we did through reports. At the 20th PCUS conference Mr. Khrushchev confirmed – to the shock of Italian communists – everything that we had said, everything that was happening under Stalin’s despotic, vicious and bloody regime. All of it was confirmed, down to the last detail. We had precise documentation. We had a Slavist, whose name was Napolitano, who translated everything and made it possible for us to talk about the doctor’s plot, the gulags…

There was great concern that the advent of communism would have jeopardized the right to private property, and thus that Italians’ savings were at risk. This fear is back again today. The Comitato Civico was the only real people’s movement. We had various groups, the Young Students, Young Workers, Young Farmers; they reflected what people’s aspirations, needs and desires were, without the filters of middle class intelligentsia.

Gedda firmly believed in cinema, and had stipulated a contract with the colossal Belle & Howell by which all parish halls would have 16 mm projectors. All of this was also quite useful during the Comitati Civici campaigns, because the films would go through that circuit, but especially because we had a little fleet of trucks that would go travel the countryside, all over Italy. They would stop in a strategic area and set up a screen in a farmyard, and in the evening show propaganda films to villagers from the surrounding areas.

My experience with the Comitati Civici ended on April 18 because I realized, along with my friends, that I was not destined to a political calling. I refused any opportunity to link myself to a political party because I was of the conviction – and still am – that politics always dirties and compromises the con- science of someone who fights a battle of ideals for no other reason than to defend his convictions. I left the Comitati Civici immediately. Then, along with Diego Fabbri, who had left at the same time, we decided to dedicate ourselves to cinema through a Catholic organization whose president, Mario Melloni, later became a famous columnist for l’Unità [Fortebraccio]. At the time he was a member of the Democrazia Cristiana, and a close friend of Andreotti. Diego Fabbri and I were the managing directors of the company. The first film that we made was a truly Catholic film, I sette peccati capitali (The Seven Deadly Sins).