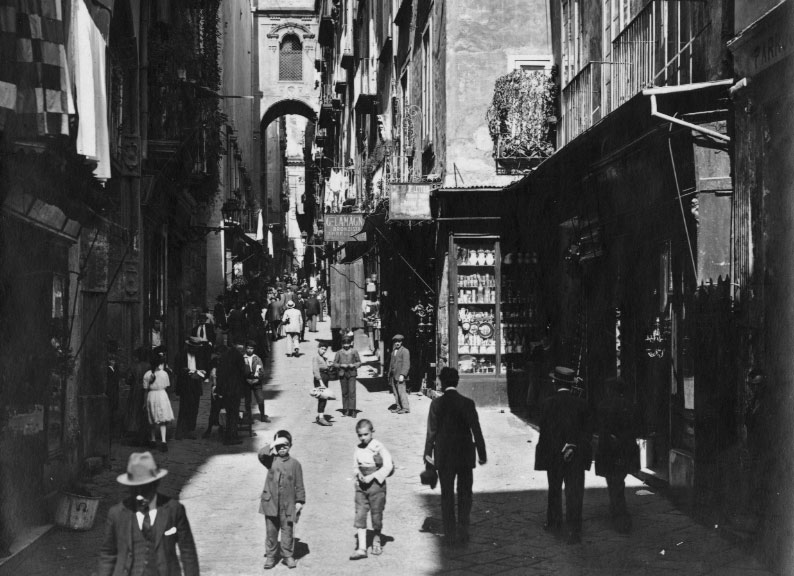 Naples is a synecdoche: it is the geographic and mental place which better than all others sums up a territory, the South, all Italy. The years of the birth of cinema coincide with those of the great Italian emigration, and by one of those short-circuits of which the cinema is capable, Naples, with its image and its secular store of myths and rites, makes itself the vehicle of Italian identity in all the world.

Naples is a synecdoche also in the sense that the Neapolitan silent cinema is in potentia another history of the Italian cinema. Despite the best premises – a fertile humus for the practice of spectacle and performance, a brood of artistic and entrepreneurial talents, a formidable literary and musical heritage, an international market – Neapolitan manufacture lacked the industrial background to develop with sure planning, and the existence of the city was to be condemned to a condition of periferic marginality perpetuated by historiography.

Finally it is the Naples of Vittorio Martinelli, who with a keen nose and unparalleled determination pursued the tracks of the many threads which make up the history of Neapolitan cinema.

This is the basis underlying the project Naples/Italy, which originated from the presence in the Cineteca di Bologna of filmic archives and unpublished documents linked to Naples and the Campanian region: the archives of Vittorio Martinelli, Fausto Correra, and Leda Gys, deposited by another great Neapolitan, Goffredo Lombardo.

These materials rapresent a unique visual heritage, certainly unique, from which to draw in order to study the power of the Neapolitan image and the importance of the city in the construction of the Italian identity.

The three programmes presented are the fruit of some of the most urgent reflections inspired by work on the documentation of the Neapolitan collection. The journey starts from the presentation of a selection of titles restored from the Correra collection, recently rediscovered, and continues through two fundamental directions of reseach: the tradition of vedutism and the echoes of the Grand Tour on one side and the path traced by the course of migration on the other.