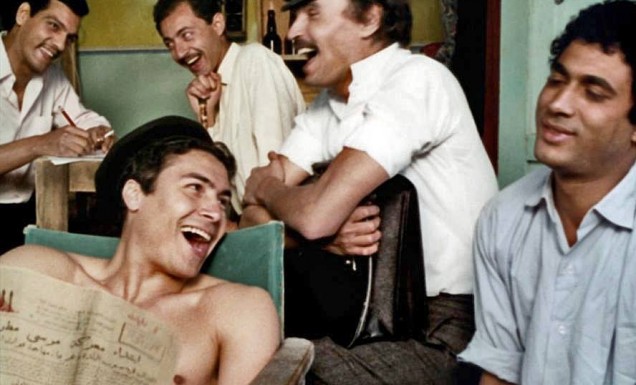 Youssef Chahine was a true man of the movies, in the sense that he took on almost every job in the business: he was a director, of course, and a producer too, as well as an actor, a singer and a film editor. Whenever by some miracle his films made a bit of money, he reinvested it immediately in subsequent productions, or in the purchase of a cinema in downtown Cairo, where he could show good films from around the world.
For more than 50 years, he tried his hand at every genre, from movies set in the ancient world to straight documentary and from intimate drama to musicals, not omitting historical sagas and autobiography. The truth is that he did not so much pass from one genre to the next as combine genres with every film. Thus, to use Bab el-Hadid (Gare centrale, 1958), one of his most famous pictures, as an example, the story may qualify as a drama, but it borrows from film noir, from social comedy and politically committed filmmaking too.
Like his contemporaries, the novelists Albert Cossery and Naguib Mahfouz, Chahine was passionately in love with the people of the Nile, with the ordinary working people of Egypt, but he never lost a taste for the old-fashioned stars of the silver screen. Who remembers, these days, that it was Chahine who discovered Omar Sharif and set him on his way? The legendary screen couple of Omar Sharif and Faten Hamama was launched for the first time in the director’s splendid Serâa fil al-Wadi (Struggle in the Valley, 1954).
Yet, even during the golden age of the Egyptian studio system, Chahine was the first to prefer location shooting as a means of representing Egypt and ordinary Egyptians in all their diversity. Indeed, the 40 films he produced offer a commanding view of the history of 20th century Egypt.
Rooted as it is in the realities of his own nation, though, Youssef Chahine’s film-making has a universal appeal. He grew up watching French and British films of the 30s and 40s. He learned his craft in Hollywood and was deeply influenced by Italian neorealism. His culture was global and his films spoke to the world. Like most of the inhabitants of the cosmopolitan city of Alexandria, where he grew up, he was fluent in many languages. The great French critic Serge Daney pointed out with some justice that Chahine was the West’s last great Arab interlocutor. Ten years after his death, his friend Jean-Luc Godard quoted from several of his films in The Image Book to emphasise that the dialogue with the Arab world has come to an end.
Chahine was a Levantine, though the term is no longer in vogue, born into a Greek Catholic family in 1926. He died in Cairo on 27th July 2018, an Egyptian citizen. He had put Egypt on the map of world cinema. And to his dying day, he re­mained an ardent opponent of dictatorship, of fanaticism and populism. He was lucid, but he never allowed his lucidity to undermine a thoroughly cheerful and contagious optimism.