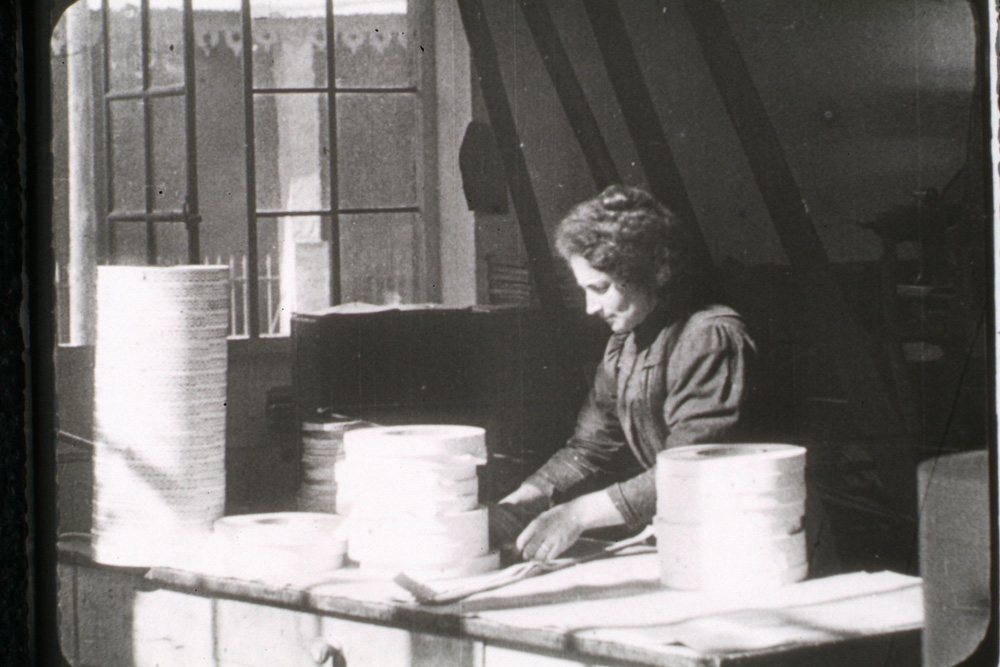 We present twelve programmes, about a hundred films in total, with the aim of bringing the world (and the cinema world) of 100 years ago into our 2009 reality. So the scope of “A Hundred Years Ago” appears to be similar to that of last year’s programme – but it has secretly expanded. For it also includes the first programme of”All the Colours in the World”: “The Colours of 1909”.

The opening programme of the Cinema Ritrovato festival celebrates a particularly appropriate anniversary: 100 years of film festivals. Our historical reconstruction brings together eight (of approximately sixty) films which were shown in October 1909 in Milan at the first ever international film festival, the “Primo Concorso Mondiale di Cinematografia”.

Half of the monographic programmes are dedicated to a national cin- ematography and the others to specific production companies – “Italy 1909”, “USA 1909” (both double programmes), “Film d’Art 1909” and “Denmark & Nordisk 1909”.

The swiftly growing Italian industry was focusing on export, with its historical costume dramas, documentary films and Cretinetti – star of the first real comedy series. In the USA, in 1909 alone, Griffith shot an extraordinary total of 142 films for Biograph, while Vitagraph remained the dominant American studio in Europe. Pathé Frères, the unchallenged market leader, not only distributed the production of the nominally independent Société Film d’Art: it also set up, under the creative direction of Albert Capellani, a more successful com- petitor, S.C.A.G.L. And then there was the Danish newcomer, Nordisk, which registered its polar bear Trademark on 23rd April 1909 and would soon play a very prominent role in the international film market.

Our research project has been running since 2003 and provides a cinema history in real time, year by year. This is its seventh interim report and it includes some context evoking the world of 1909; in images of the time (“Lost World”), in the most momentous cultural events of the year (“What’s New in 1909”) and in the geopolitical sit- uation, marked as it was by colonialism and inequality (“Wanderlust and Geopolitics”).

In terms of cinema, 1909 was a clear turning point. Ends and beginnings overlapped. This was the year when several series typical of early cinema, such as the féerie and films with sound on disc, start- ed to peter out (“Farewell, Early Cinema”) and other genres and phenomena, crucial in the coming years, had begun to take shape: film stars, newsreels, feature-length films (“Coming Attraction: Feature Length”). But alongside these changes some things remained constant. For example, from the earliest days until at least 1916 or 1917 accident rubbed shoulders with intention: non-fiction and fiction were happy to share the same space and time. This basic feature of the early cinema is a major attraction of the Cinema of Attractions, as defined by Tom Gunning: which is also often a “Cinema of Distractions”, as proposed by Luke McKernan.

Cinema History 1909: The Industry Gets Organised

In most countries early films and film exhibition fell, almost unnoticed, into the legislative sector of travelling trades. But once film production and exhibition (which had become increasingly sedentary) had experienced a massive growth spurt, society and the law started to react to the new medium: 1909 saw the first cases of censorship and admission restrictions for children.
1909 has entered cinema history as the year of the Paris “Congrès International des Fabricants de Film”, which took place in early February, with Georges Méliès as its chairman and Charles Pathé and George Eastman its patrons. This was the European producers’ reaction to the “Trust” which Edison had set up in 1908, with the aim of excluding European production from the lucrative American market. Edison was also trying to ensure for the members of the cartel exclusive rights in the use of film stock produced by Eastman. (Eastman himself dropped this idea, when Charles Pathé threatened to go into film stock production on his own account). The congress notched up a number of lasting agreements: technical standardisation of the perforation, a fixed rental tariff per metre of film (which lay only slightly below the sales tariff in force at the time) and the swift transition, pushed by Pathé, from sales to rentals, to the disadvantage of local retailers. This led to regional boycotts of Pathé and, in the case of Great Britain, to the French devil being ousted by the American Beelzebub. The opening of the British market to American imports would come to inflict far more damage on the local producers than the mighty Pathé had done.

Many people are now wondering – and asking me – how much longer our “A Hundred Years Ago” programme can go on. Most seem convinced that the short film disappeared shortly after 1910 and the feature-length film took over. This might be correct if one assumes that film history is the history of the entertainment feature. But our aim is to discover and present film production of the past in all its manifestations. As what could be called an unavoidable side effect, we are also generating a history of cinema programming. From 1908 onward one genre, the scène dramatique, became noticeably longer. But one long drama does not make a cinema programme. The polyphonic programmes of the short film era are succeeded by the triadic harmonies of documentary-comedy-drama, the basic structure of cinema programmes up to the end of the silent film era. “A Hundred Years Ago” will continue for a good while yet.

The process of programming certain themes or films means we have to forego others. Sadly, no place could be found for the circus, alcoholism, madness and tourism, all themes which were tackled in several works of 1909. Likewise, to name but one title, we had to cut Film d’Art’s impressive filming of Tolstoy’s Resurrection. L’Assommoir, however, is in the programme, although it had its première at the end of 1908, because we could not locate a complete copy last year. In the course of viewing for the programme, films are often newly-identified or more precisely dated. In two cases productions now dated to 1908 were kept, as particularly worthwhile extras.

This year, as before, Henri Bousquet’s Pathé catalogue has been an indispensable, invaluable compass in the jungle of early cinema.
My special thanks go to Giovanni Lasi (curator “Concorso Milano 1909” and “Italy 1909”), Luigi Virgolin (co-curator “Italy 1909”), Tom Gunning (curator “USA 1909”), Béatrice De Pâstre and Alain Carou (curators “Film d’Art 1909”) and Thomas Christensen (curator “Denmark & Nordisk 1909”) for their precious work and cooperation. While preparing the programme I viewed about 400 films in ten European archives, and that meant a lot of work for a lot of people. Thanks are due to Bryony Dixon (London), Caroline Patte (Paris) and Elif Rongen Kaynakci (Amsterdam) and many others, too numerous to mention.
For the third time we are featuring an exhibition of film posters, this one from 1909, from the collection of the Fondation Jérôme Seydoux-Pathé. These are originals, of extraordinary quality and very rarely exhibited. On behalf of all those attending the festival, we thank those who have so generously lent us these unique documents.
All Pathé and Gaumont titles are shown with permission of Gaumont Pathé Archives.