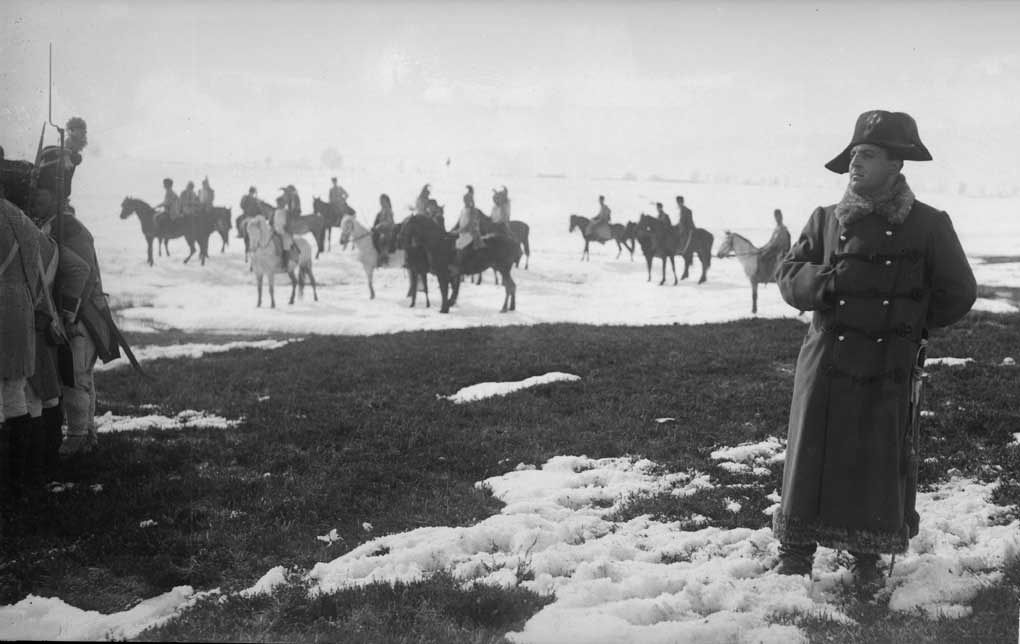 In early Twentieth-century Turin, Arrigo Frusta (1875-1965), born Augusto Sebastiano Ferraris, was the director of Ambrosio’s Screenplay Office. Having escaped his father’s plan for a future as a notary, Frusta worked as a journalist, dialect poet and lovable loafer until he stumbled upon his vocation: writing for the screen. The young cinema industry was hungry for new stories, and Frusta was always ready to hunt for the right inspiration; the idea for a successful film could spring from a note jotted on the back of an envelope or a short newspaper article about a strange piece of news. The main source, though, are the great classics: Schiller, Manzoni, Shakespeare, no adaptation was too mighty for Frusta’s pen. Master of variations on a theme, he was perhaps the first in silent Italian movies to receive public recognition as a screenwriter.
Between a compliment to a pretty actress and a mountain hike (in 1910 he shot three films at high altitude with Giovanni Vitrotti), Frusta worked on over 250 screenplays and scenarios combined, making a decisive contribution to establishing the practice of ‘written cinema’ during the crucial years when filmmaking, as Frusta himself said, became an industry, with film length getting rapidly longer and the form’s genres being classified.
Frusta’s screenplays alternated words with drawings and sketches. As Silvio Alovisio discovered analysing the rich collection of documents at the Museo Nazionale del Cinema, Frusta’s working method often involved a visual approach to the story, demonstrating how the cinema-factory of the time did not draw rigid distinctions between different roles. He scripted big hits of the time – including Nozze d’oro (1911) and Gli ultimi giorni di Pompei (1913), not shown this year because both have been screened at the festival in the past – helping to consolidate the success of Italian film internationally, as attested by this section’s prints coming from Amsterdam, Washington, Tokyo and London (special thanks to the BFI – National Archive, which gave us permission to work on nitrate prints from the Joye collection). Although Frusta preferred historical dramas (a new restoration of the masterpiece Nerone will be screened), some of the section’s main surprises come from exploring the terrain of fairy tales, thrillers and farces.
The guiding idea of this programme of films is to pay attention to the small gestures that define a character, to the abilitiy in creating causal relationships between scenes and to the touches of realism. In other words, the fruit of that ‘writing workshop’ of which Frusta was master.

FRUSTA IN THE KOMIYA COLLECTION 1

FRUSTA IN THE KOMIYA COLLECTION 1

FRUSTA IN THE KOMIYA COLLECTION / A GAME OF CHESS WITH DEATH

FRUSTA IN THE KOMIYA COLLECTION / A GAME OF CHESS WITH DEATH

The three titles in this programme complete the variegated genres of the series ‘Serie d’Oro’ launched in 1909 with Spergiura! and Nerone. Arturo Ambrosio viewed Frusta as a kind of living encyclopedia, capable of writing or rewriting any story locked up in his Screenplay Office. For the adaptation of Schiller’s ballad Der Handschuh (Il guanto), Frusta recreated a romantic court atmosphere with a big finale, unfortunately lost, in which real lions keep viewers on the edge of their seats. In 1911 D’Annunzio – under an advantageous contract and without writing a line, save exequatur and a fleeting signature at the bottom of Frusta’s screenplays – let one of his works be filmed for the first time: Sogno di un tramonto d’autunno features Mary Cléo Tarlarini, Ambrosio’s first star, perfectly playing the part of a restrained and haughty Gradeniga trembling with jealousy. Frusta did not look down upon any project and, with directors like Maggi, Rodolfi and Caserini, he not only made the first foray into comedy, which would become a successful genre in Italian cinema, but also dedicated unusual care in writing slapstick. The manuscript of the screenplay for Gigetta è gelosa (a lost film made in 1914) contains a surprising monologue to be performed (!? …) in front of a mirror, written by Frusta for Gigetta Morano. The screenwriter had a certain care in writing female roles (and weakness for actresses), and it was the leading actress of Santarellina who would remember that Frusta was the Turin production company’s true genius.
Claudia Gianetto