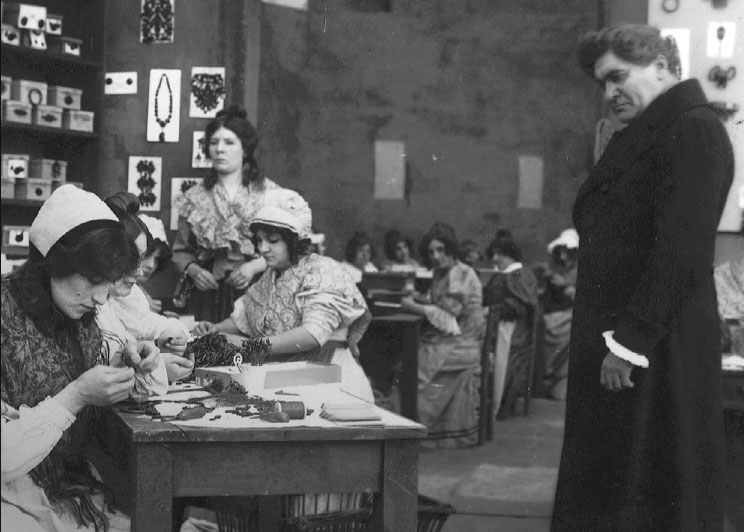 Thanks to the courtesy of many archives and Fondation Jérôme Seydoux-Pathé our programme comprises a first selection of 24 films by director Albert Capellani (1874-1931), spanning the eight years of his career in France, from his debut film Le Chemineau for Premiere in January 1906 to Le Chevalier de Maison-Rouge, also for Premiere, in January 1914, his last film screened in France before the war. Our last Capellani film is The Red Lantern, with Alla Nazimova in the lead, shot in the USA in 1919. We include it as a taster for next year’s festival when – alongside more of Capellani’s French films, some newly restored – we shall also be exploring his American work (1915-1922).

If I am not mistaken, this is the first ever good-sized Capellani retrospective. At the end of his essay on Germinal (in: La Persistance des images, 1996, pp. 40-41), Michel Marie noted that Capellani is probably the most underestimated director of the 1910s. Quite so, say I – and of earlier years as well. That this programme is now taking place is thanks to such films as Les Deux Soeurs (1907), Amour d’Esclave (1907) and Samson (1908). During the exhaustive viewings for the A Hundred Years Ago section, which have taken place here in Bologna since 2003, I have been struck every year since 2006 (1906) by the exceptional quality of the films of one Albert Capellani, an impression which was emphatically confirmed by last year’s L’Assommoir (1908) and La Mort du Duc d’Enghien (1909). Capellani’s work deserves to be comprehensively exhibited at last, noticed and appreciated beyond the limited circle of film historical research. In the writing of Richard Abel, Ben Brewster and Lea Jacobs, Tom Gunning, Michel Marie, Eric Le Roy, Bernard Basset-Capellani and others Capellani’s stature and significance are sometimes mentioned and sometimes emphasised. There are, on the other hand, scholarly publications about S.C.A.G.L. (La Société cinématographique des auteurs et gens de lettres), in which Capellani films appear but without so much as a mention of his name.

The programme is not structured chronologically but, like a book, divided into thematic chapters, with each configuration of films highlighting specific features of this great oeuvre.

Capellani’s speciality as a director is the broad scope of his narratives, connecting different locations and characters, which invests even short films with grandeur and space, to such an extent that the film lengths, given in either metres or minutes, often seem unbelievable. What? Can L’Épouvante really only be 11 minutes long? And Pauvre mère and Mortelle Idylle only 6 minutes each?

During the early years, Capellani was also working in the genre which, since 1902, had generated the longest films, the scènes de féerie et contes, where even super-productions of 275m to 400m (15-20 minutes) were not unusual. Stage spectaculars of this genre, a much-loved and historically important form of musical theatre in 19th-century France, spawned one final heir in the pre-1910 cinema (which is for us a unique and precious visual documentation of this extinct theatrical format). Capellani – a hundred years after the template was created – made, in Le Pied de mouton (1907), a captivating film version of the most famous of these stage shows, the 1806 mélodrame-féerie comique of the same name, by Alphonse Martainville and César Ribié, with music by Taix. Capellani also adapted other opéra-féeries, such as Cendrillon (1810, film version 1907) and Aladin (1822, film version 1906), by Nicolas Isouard.

Albert Capellani came from the theatre. According to a short biography, datable to 1911 (reprint: Henri Bousquet, Catalogue Pathé 1896-1906, 1996, s.p. [pp.970-971]) he was the successful director of the Alhambra Theatre when Pathé recruited him as a director in 1905. Like his brother Paul Capellani he was a trained actor, and the Bibliothèque Nationale has documents showing Albert Capellani appearing in stage productions at the Théâtre Antoine between 1904 and 1907, which means that his two careers, in cinema and stage, ran parallel for at least two years. In the summer of 1908 he was appointed artistic director of the newly-formed S.C.A.G.L., “où il débuta par un coup de maître: L’Arlésienne” (ibid).

As with Lubitsch and Ophüls, Capellani’s previous experience in the professional theatre becomes obvious in the way he directs actors and the positive relationship he forms with the audience. He had a tremendous feeling for sets and costumes, for special effects, for stories with a backstage setting and for stars – he worked with Mistinguett, Napierkowska and Nazimova, and under Capellani’s direction stage stars became film stars (or at least his films are among the best of their careers). He was also skilled at casting and brought his old colleagues from the Théâtre Antoine into his film productions. Alexandre Arquillière, for example, was givenin 1908 the role of Coupeau in L’Assommoir (then, from 1911, he would play Zigomar in Victorin-Hippolyte Jasset’s series).

Even light readers could not have failed to notice the concentration of literary titles in Capellani’s filmography, from his first, 5-minute film Le Chemineau, made in late 1905 (Victor Hugo’s Les Misérables, 1862), to the approximately 2-hour Chevalier de Maison-Rouge of 1914 (Alexandre Dumas père, 1846), from L’Arlesienne of 1908 (Alphonse Daudet, 1869) to Germinal in 1913 (Emile Zola, 1885). But passionate readers too may be unaware of how swiftly and how systematically successful prose writing was, in the 19th century, turned into plays and opera libretti (as in the case of La Glu), often by the authors themselves. (Today successful prose is still filmed and also, in a new development, successful films are now adapted for the stage.) Capellani probably consulted the original novels and their illustrations (for Les Misérables, 1912, this is certainly the case) but it is likely that his films are primarily based on the stage versions. Capellani was able to endow short films with a dimension of amplitude, but was equally skilled at handling the large-format dramaturgy of longer films. His L’Assommoir of 1908 is considered, at 740m or 40 minutes, to be the first long scène dramatique, and up until 1914, alongside many shorts, he regularly shot long and even very long films, such as La Glu, Le Chevalier de Maison-Rouge and the 1912 multi-part Les Misérables.

A keen innovator, prodigiously gifted director and efficient head of the S.C.A.G.L., Albert Capellani epitomises the grandeur, quality and creativity of Pathé during its ten most glorious years. A figurehead of the cultural mainstream; a man who brought to the cinema successful novels, celebrated theatre productions and fêted vaudeville stars; a film director who stood for impressively meticulous staging of historical material – the complete opposite of what would later delight the surrealists about the cinema before the First World War (the popular burlesque). Capellani’s profile made him the target of a film historical trend – now long discredited – which criticised “the theatrical” and promoted “the filmic”. This is perhaps why he was so underestimated.

Yet the greatest surprise awaiting us in Capellani’s work, from the very beginning, is exactly this, the strong presence of the filmic alongside the theatrical. The filmic quality is not only to be found in the fluidity of the narrative and the dramatically- effective montages, but also in the sheer photographic beauty of exterior shots, which is not found in the work of any of his contemporaries (except sometimes in non-fiction scènes d’art et d’industrie or scènes de plein air). Capellani and his camera crew captured the photogénie of a rain-sodden street in Mortelle Idylle (1906), the play of light with the shadow of foliage in L’Arlesienne (1908) and the architectonic pictorial elements of the bridge, emphasised by a high-angle shot, during Cendrillon’s nocturnal flight (1907).

No article written at the time omits to mention, after Capel- lani’s many talents, his likeable, warm-hearted personality. He was much loved by his colleagues and actors.

The Pathé catalogue text, which I have quoted twice, ends with a comment that S.C.A.G.L. “owes its prestige to Capellani who, despite his modesty, stands out as the most precious jewel in its crown.”