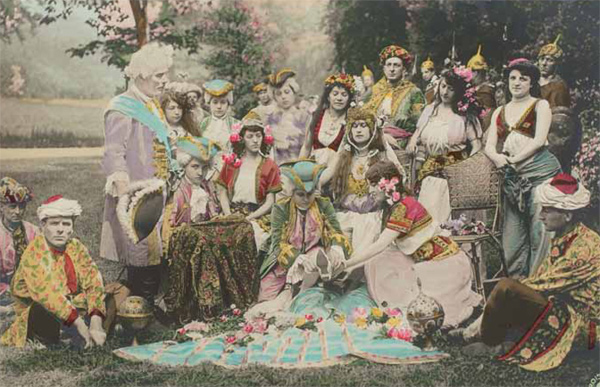 His name was always familiar, yet it was only attached, shadow-like, to two films (Les Misérables, 1912, and Germinal, 1913). Cinema Ritrovato’s Albert Capellani retrospective, presented in two parts, in 2010 and 2011, is a major event: a great director and his work are re-discovered. In this year’s programme we are screening more than twenty titles, from all three stages in Capellani’s career: short films before 1910; the sublime masterworks from his years as artistic director of S.C.A.G.L., Germinal and Quatrevingt-treize, newly restored by the Cinémathèque française; and the largely unknown films of his American period. Rare copies of Camille (1915) and The Feast of Life (1916) were located in the collection of the Národní Filmový Archiv in Prague. We are able to show, at last, the complete L’Homme aux gants blancs (1908), in a newly restored version funded by the Fondation Jérôme Seydoux-Pathé. Germinal (1913) and Le Signalement (1912) are shown in the “Silent Colour” section, and several Capellani films are included in the section “A Hundred Years Ago: Seventy Films from 1911”.

To make the Capellani season last longer than the festival, we are bringing out a DVD, “Albert Capellani: A Cinema of Grandeur”, featuring twelve films made from 1905 to 1911 and including many extras. The edition is a co-production of the Cineteca di Bologna and the Fondation Jérôme Seydoux-Pathé.

As a 20th-century director Capellani works with stories rooted in the present of their times: he achieves a wonderful Effet de Réel with Paris street scenes (Les Deux soeurs, L’Homme aux gants blancs). He weaves his characters and plots into continuous narratives consisting of photographic evidence of the sequence of events.  He shows cinematographic images of great immediacy, which grab and hold the audience. This is the cinema of empathy, of feelings, the cinema of the now-past 20th century.

Capellani is a director of this 19th century. His films films allow us to participate in the cultural life of the 19th century: they give us access to its imaginary worlds, its entertainments and its fantasies. There are féerie subjects, with special effects and apotheoses (La Légende de Polichinelle, 1907). There is the fascination with the ancient world and its decadence – veil dances, shimmering colours, goblets of hemlock (Amour d’esclave, 1907)– and the “local colour”, be it Cuba (Feast of Life, 1916), Elizabethan England (Marie Stuart, 1908) or Paris, recreated in Studios in the U.S.A (The Virtuous Model, 1919).  There are realistic reconstruction of events that took place in 1796 (Le Courrier de Lyon, 1911), and monumental frescoes of war and social  struggle. (Quatre-vingt-treize and Germinal).

Albert Capellani came from the theatre and began his cinema career with Pathé in 1905. His contribution – as a man of letters with a tremendous capacity for hard work – came at a time when the company’s studios were embarking on a new phase of their history. Between 1906 and 1908 the team was changing radically, with the departure of directors such as Lépine and Heuzé and new arrivals including Denola, Burguet, Gasnier and Leprince. In 1908, in the early days of the first cinema crisis when, crucially, production policies were undergoing drastic changes, he made his mark with L’Arlésienne and Charles Pathé then promoted him to artistic director of the Société Cinématographique des Auteurs et Gens de Lettres (S.C.A.G.L.).

Albert Capellani was working at that time with the cameraman René Guichard and, whether supervising or directing in the studio in Vincennes on Rue du Petit Parc, his work schedule was hectic. In the space of a year, from March 1910 to March 1911, he made no fewer than 25 films! His directorial talent, manifested in his narrative skill and the fluidity of his editing, his naturalistic style, his talent for suggesting a protagonist’s character and intention, earned him respect in the professional world. When he adapted works he had read as a student, he was crucial to make the cinema “a great art” – which was what Charles Pathé and his colleagues were striving for, not only in setting up S.C.A.G.L., but also in initiating a system of film rental, which enabled them to offer more films in a wider variety.

Capellani’s influence grew throughout the 1910s, and we can easily imagine, from the testimony of Henri Étiévant, the impression he made on his team: “He was a large fellow, with red hair and a strong personality; very intelligent, a real gourmet, and a film maker who mastered his work with consummate skill.”

On April 24, 1915, Moving Picture World announced that the World Film Corporation had acquired the services of Albert Capellani, hailed as “the man who made Les Misérables”, a film released in America two years earlier but still regarded as a milestone. “Much of the general excellence of pictures may be directly traced to Mr. Capellani and his advanced ideas regarding the possibilities of the photoplay,” the World reported, which included being “one of the first to utilize the services of famous dramatic artists” in motion pictures. World, controlled by the Shubert theatrical organization, put Capellani to work on a series of theatrical adaptations, often with Parisian settings, shot at their Peerless Studio in Fort Lee, New Jersey. After completing Camille, starring Alice Brady, Capellani joined Maurice Tourneur and Emile Chautard at Paragon, a new studio which Jules Brulatour had constructed just down the street from the Peerless. Here he made La Vie de Bohème, again with Alice Brady, and began an association with Clara Kimball Young that would continue after Young left to establish her own production company. Those films, including The Common Law and The Foolish Virgin, were also made in Fort Lee, this time at Alice Guy Blaché’s disused Solax studio.

Capellani surrounded himself with many other French émigrés, including cameramen Lucien Andriot, Lucien Tainguy and Jacques Monteran, and designers Henri Menessier and Ben Carré (his brother, Paul Capellani, also appeared in many of the films). By the autumn of 1917 Capellani was working for Metro at their New York studio, where his films included three starring Alla Nazimova, notably The Red Lantern (shot in California when the 1918 influenza epidemic temporarily closed most of the studios in the East). Returning to New Jersey the following year he established Albert Capellani Productions at the old Solax studio, where he worked as both director and producer. Capellani supervised several George Fitzmaurice features while personally directing such films as Oh, Boy, an ambitious adaptation of a popular Jerome Kern musical, and The Virtuous Model, one of his most atmospheric “Parisian” reconstructions. On December 20, 1919, while Capellani was directing The Fortune Teller, a fire at the studio destroyed the Solax laboratory, which had only recently been enlarged and improved by the Blachés. Capellani subsequently joined William Randolph Hearst’s new production company, Cosmopolitan, for whom he made his last four American films. He returned to France after directing Marion Davies in an adaptation of Marie Corelli’s fantastic melodrama, The Young Diana (1922).